Apple Pie Dip – the same delicious flavors of apple pie in easy to make dip form. Serve with crisp cinnamon sugar chips and no one can resist! 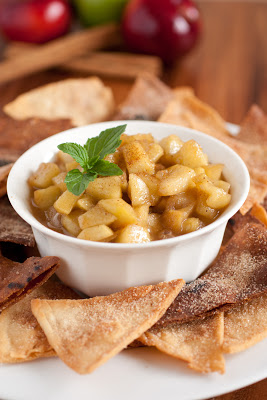 One pin down 1,000 to go. I love when I finally get around to trying that pin I’ve been wanting to make. I found this over at The Pea Kitchen a few months ago and have thought about making it many times since. I figured Thanksgiving season would be the perfect time. It’s pie season!

This dip is quick and easy and it tastes just like a delicious apple pie filling. So you get all the flavors of apple pie without the wait and without all that tedious prep work. I think this recipe has also inspired me to sprinkle my apple pie crust with cinnamon and sugar this year, yum!

There are many different ways you could serve this and I’ve listed in the recipe a few ideas. I left them out of the picture just so you could get a good glimpse of the actual apple pie dip, but If you were to serve it with the ice cream or whipped cream it would be even more like the real thing, and the caramel sauce would just take it over the top.

Also, the cinnamon sugar chips are such a simple and delicious Mexican dessert that can be used for other desserts or they are delicious all on their own. Many Mexican restaurants serve them drizzled with chocolate sauce, caramel sauce and sweetened whipped cream for a simple dessert that is sure to satisfy. Enjoy! 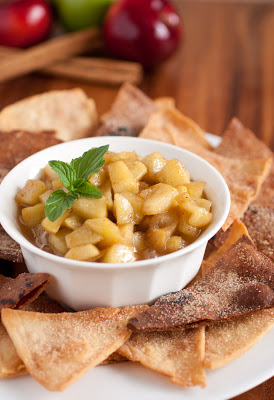 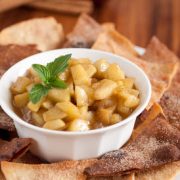 The same delicious flavors of apple pie in easy to make dip form. Serve with crisp cinnamon sugar chips and no one can resist!
Servings: 6
Prep20 minutes
Cook20 minutes
Ready in: 40 minutes