Soft and tender banana cupcakes topped with a rich, chocolatey Nutella buttercream frosting! The perfect flavor combination in cupcake form. Everyone will love sinking there teeth into these tempting treats! 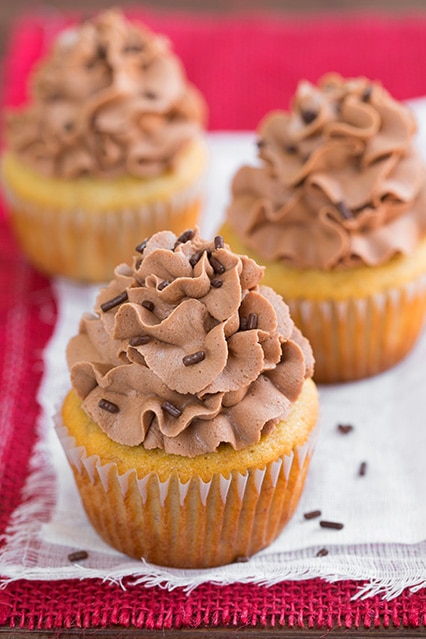 Aren’t bananas and Nutella just made to go together? I was at a loss for what I wanted to make and post, don’t get me wrong I have endless lists of things I want to make but nothing on my lists seemed to be what I was in the mood for.

After some thought, it hit me, something with banana and Nutella. And if you follow my blog you know I’m obsessed with cupcakes so what better than to make that combo in cupcake form? It’s a miracle I had any of this heavenly, fluffy, melt away in your mouth, Nutella Buttercream Frosting left to go on these cupcakes.

Once I had a taste there was no stopping me, it was like one of those times where you have to hurry and frost all of the cupcakes while restraining yourself and hurry and give them all away or you’ll be left with half the cupcakes unfrosted.

Which is something I almost felt fine about doing because people would still be happy with an unfrosted banana cupcake, right? We’ll just tell them it’s a fluffy banana muffin :). This frosting though, has got to be one of the best I’ve ever made. 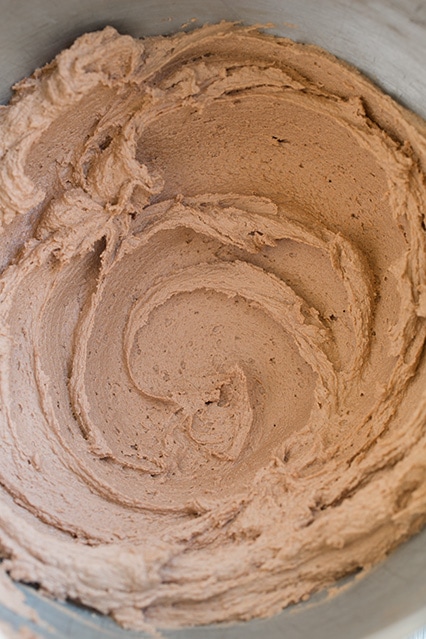 This recipe ended up making an unpopular number in baking – 14, how annoying I know (if only it could have been 13, then it could have at least been labeled a baker’s dozen). But sometimes it just happens. I adapted it from my banana cake recipe and realized with all that added banana there was no way I was going to fit it into 12.

Let’s just say you’ll be glad you have 2 more than you normally do, I’d much rather have more cupcakes than a lesser amount. With that said, the frosting listed is for 12 cupcakes but you could definitely get away with the 14 if you don’t want a tall layer of frosting.

If you do like the tower of frosting then make 1 1/2 the recipe. You might just want to make 1 1/2 anyway then you can keep it in the fridge and eat it like fudge for the next few days. The perfect afternoon pick me up. Enjoy! 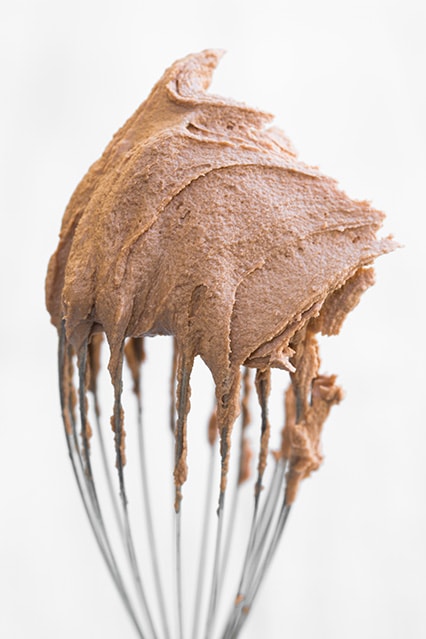 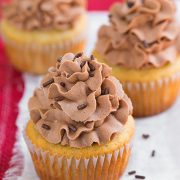 Instructions
In the bowl of an electric stand mixer fitted with the paddle attachment, whip together butters on medium-high speed until very pale and fluffy, about 5 – 6 minutes, occasionally scraping down sides and bottom of bowl. Add in Nutella and cocoa powder and whip 2 minutes longer. Mix in vanilla. Add powdered sugar and blend on low speed until combined, then add in cream and whip on medium-high speed until pale and fluffy, about 3 minutes longer. Spread over cupcakes.