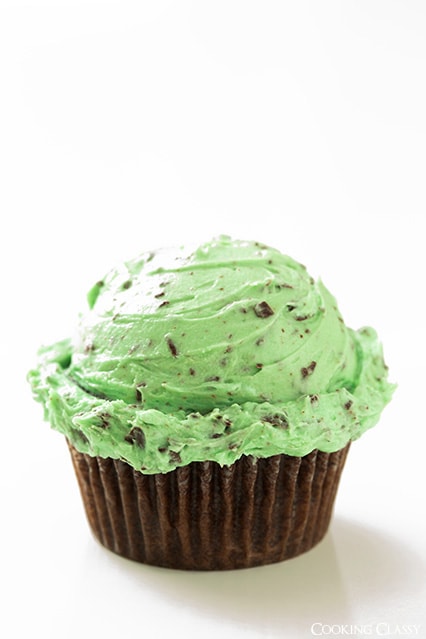 If you really want a cupcake that people will talk about, cut out about a tablespoon of the cupcake on the top, in the center, and spoon in some dark chocolate ganache. You’ll make friends for life with anyone who tries one :). Really they are so good they don’t need the added bonus of a rich ganache filling, so make them without it and you’ll still fall in love. Enjoy!

I haven’t tried this yet, but these would be cute to bake the cupcake portion in ice cream cones. Then top with frosting. Or you can do them like so… 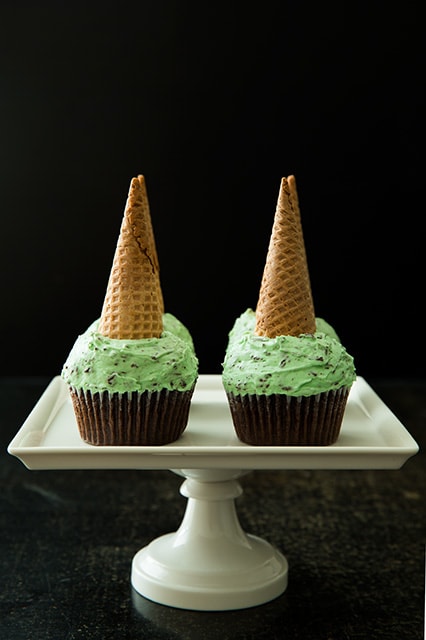 *If you would like the tons of frosting like that pictured make 1 1/2 of the frosting recipe. **Be careful not to melt the butter if softening in the microwave. I like to let mine either rest on the counter and come close to room temp or in a rush, place it in the microwave, unwrapped and resting in a small bowl and heat in 4 second intervals rotating between intervals until it's somewhat soft.
Nutrition Facts
Chocolate Cupcakes with Fluffy Mint Chocolate Chip Buttercream Frosting
Amount Per Serving
Calories 431 Calories from Fat 225
% Daily Value*
Fat 25g38%
Saturated Fat 16g100%
Cholesterol 80mg27%
Sodium 147mg6%
Potassium 114mg3%
Carbohydrates 50g17%
Fiber 2g8%
Sugar 40g44%
Protein 3g6%
Vitamin A 610IU12%
Calcium 22mg2%
Iron 1mg6%
* Percent Daily Values are based on a 2000 calorie diet.
Nutrition values are estimates only. See full disclaimer here.
Course: Dessert
Cuisine: American
Keyword: Chocolate Cupcakes, Mint Frosting
Author: Jaclyn