Cake Caffeinated…  yes, I like the sound of that. This cake is incredible to say the least! Tres Leches meets chocolate meets Coca Cola soda.  In other words, pure bliss. I love the simplicity of this cake, it starts from a cake mix but no one would know. There are two variations on this cake, if you want to do the Cherry Coca Cola version I would say the crushed cherry lollipops for garnish are a must =). 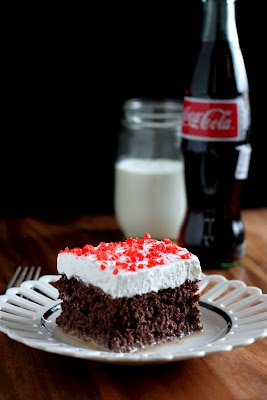 This cake has similar flavors that remind me of one of my favorite cakes, which I’m sure nearly all of you have tried (and loved) at least once, “Better Than Sex Cake.” I never though it could meet its match but here it is. This Coca Cola Tres Leches cake is an exciting, decadent must try that you will likely be adding to your favorite cakes recipe collection and sharing with others. Enjoy!

Also, check out MyCokeRewards where you can create your own recipe book and find many other exciting recipes using Coca Cola.

Compensation was provided by Coca-Cola, but Coca-Cola is not a sponsor, administrator, or involved in any other way with this pin/post. All opinions expressed are my own and not those of Coca-Cola. 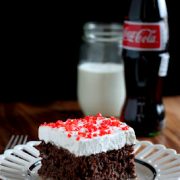 If you like cool whip you could use that instead, I just prefer the real thing
Course: Dessert
Cuisine: American
Keyword: Coca Cola Tres Leches
Author: Jaclyn