I love any dessert that can be made into cupcake form. Everything is fancier as a cupcake right :)? It’s been some time since I’ve been meaning to post a key lime pie recipe and since it’s now summer I realized it can’t wait any longer. It is one of the most refreshing chilled desserts and it has the tropics written all over it, especially with a coconut upgrade.

If you aren’t a fan of coconut, you can leave it out (I don’t understand how anyone could not like coconut but there once was a time when I was little that I didn’t care for it), simply replace the 1/4 cup coconut in the crust mixture with 2 extra sheets of graham cracker and omit the coconut extract and extra coconut on top and you’ll have regular key lime pie. 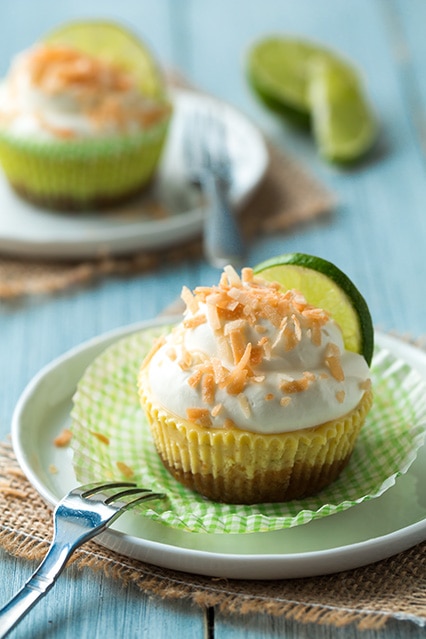 So I thought of labeling this recipe as Coconut Lime Pie Cupcakes because I really never use key limes, and I was happy to hear Cook’s Illustrated mention they didn’t taste a difference between the pies when using the regular limes vs key limes.

That makes juicing and zesting a lot easier for me. Plus I only see key limes at the store every so often, and if I’m in the mood for key lime pie I don’t want to wait around for those key limes to show up. It wouldn’t be as familiar to people though it this were labeled as “Lime Pie” don’t you think? When it’s labeled as “Key Lime Pie” it just reminds us of our favorite key lime pie we’ve eaten. 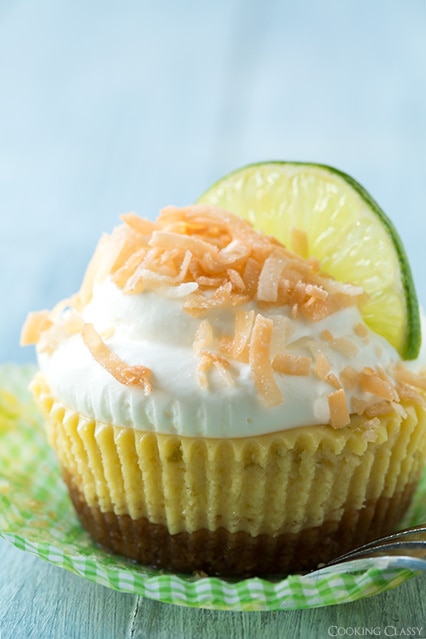 Of course you can use key limes if you’d prefer. To me it’s not quite worth the extra effort. I’ll take the large juicy limes and be done with my pie while your still squeezing those itty bitty things :).  Which ever limes you choose just be sure to try this.

You’ll be coming back for more of it’s velvety smooth, lusciously creamy texture and vibrantly tangy bite which is perfectly paired with it’s deliciously sweet and toasty coconut. Enjoy! 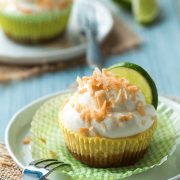 A cupcake with a taste of the tropics! Mini key lime pies with a flavor upgrade of coconut.
Servings: 12
Prep30 minutes
Cook20 minutes
Ready in: 5 hours