If you are one of those people looking at these cookies saying, really? Flowers? I know just what you mean. I used to think the same thing, I thought people were trying too hard to be fancy :). Then one day I tried something with lavender and I’ve been hooked ever since.

Some days I crave lavender cupcakes, something I never imagined myself craving. Lavender is a very unique and complex flavor (but unique in a good way). 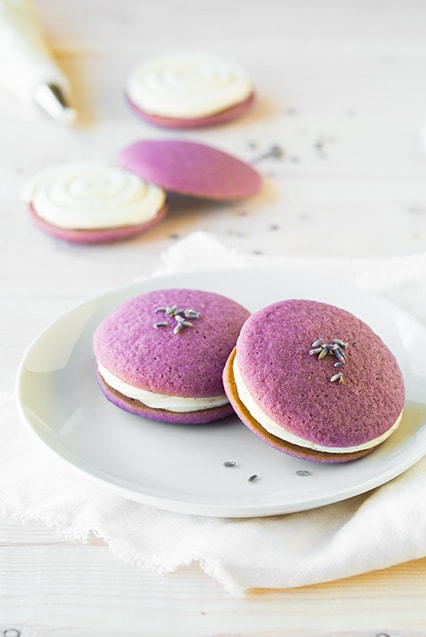 While bold and rather surprising, it seems hard to find a similar flavor to relate it to. It would be almost like what I’d imagine a sweet pine flavor to be, along with hints of mint – but it sounds kind of gross when I put it that way so lets just leave it at the opinion of it being an amazing flavor.

I love giving someone something with lavender who hasn’t tried it before, they’ll take one bite and get this look of delight followed by a look of  utter confusion and deep thought because they can’t quite put there finger on just what is in it.

Then I divulge the secret ingredient, and they will say something like, “oh, wow I didn’t know you can actually eat lavender” or “who knew lavender really tasted good.”

Yes lavender can really taste good (culinary lavender of course, don’t start baking with your Grandma’s potpourri. :) The key is, when you bake with it just don’t overdo it.

My entire family, husband and kids included loved these whoopie pies. My husband just said after taking one bite “Mmmm, I love Lavender” (and it sounded kind of funny coming from a manly man, I don’t know why).

Then following he said “get these out of my life” because he claims he can’t stop eating them :).

Hopefully you love this recipe because it was my third attempt. First one too dry, and the bit of honey mixed in added a light light tint after baked which I didn’t care for. Second attempt, too spongy and the batter seemed pretty wet to work with.

I paired it with my favorite buttercream frosting, but since whoopie pies aren’t as moist as cupcakes I added more moisture (milk) into the frosting that could absorb into the cookies.

I chose to pair it with vanilla beans which I added to the frosting because I love the combination and how the vanilla doesn’t overpower and hide the lavender (I made a few with lime frosting and preferred the vanilla, but if you wanted to do a lemon or lime frosting just replace the milk with lemon/lime juice and also blend in the zest). Enjoy!