Have you made angel food cupcakes yet? If not, then put these on the top of your to make list. They’ll definitely brighten up these cold and cloudy winter days, not to mention they taste Heavenly! 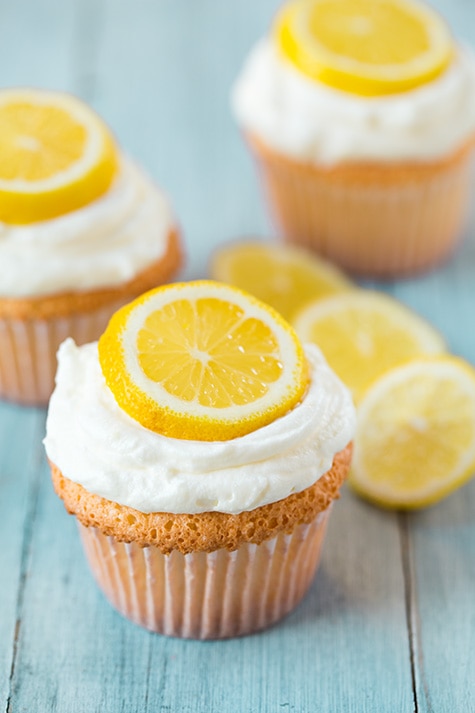 These lemon cupcakes probably seem totally out of place right now as we are all so focused on the holidays and seasonal baking, but I thought a break from the holiday baking would be nice.

Don’t get me wrong, I love all the fall flavors but I wanted to switch to something more bright and summery. It might have something to do with this never ending cold I have (and how I keep craving citrus). 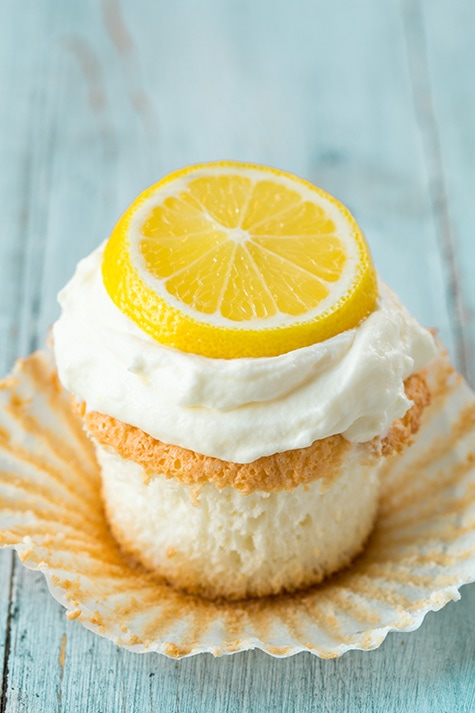 The texture of these cupcakes is delicately airy and light which pairs so well with the fresh and tart lemon flavor. And don’t even get me started on the topping for these cupcakes.

Let’s just say it takes a lot of strength not to just sit there and eat the whole bowl of it by the heaping spoonful before you even begin to top any of the cupcakes.

Thanks to the addition of the cream cheese and lemon in the whipped cream it’s almost like a lemon cheesecake (and we all know how much I love cheesecake).

Homemade angel food cupcakes are much better than those angel food cakes that you’d buy at the grocery store, so I’d highly recommend trying these at least once (then of course you’ll be hooked for life, which is always my goal. To get you hooked :). Enjoy! 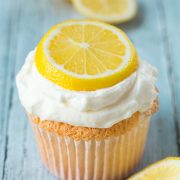 *I'd recommend working with one egg in a bowl at a time to separate the yolk and white, then pour that separated white into the mixing bowl and continue that process with remaining eggs. I do this simply in case one of the yolks breaks and gets into the whites then you'll only have to toss out 1 egg and not all of them if you can't get the yolk out. You don't want even 1 drop of egg yolk in the cake mixture or it can prevent the whites from whipping to stiff peaks.
Nutrition Facts
Lemon Angel Food Cupcakes
Amount Per Serving
Calories 217 Calories from Fat 126
% Daily Value*
Fat 14g22%
Saturated Fat 8g50%
Cholesterol 48mg16%
Sodium 112mg5%
Potassium 88mg3%
Carbohydrates 21g7%
Fiber 1g4%
Sugar 17g19%
Protein 3g6%
Vitamin A 538IU11%
Vitamin C 1mg1%
Calcium 29mg3%
Iron 1mg6%
* Percent Daily Values are based on a 2000 calorie diet.
Nutrition values are estimates only. See full disclaimer here.
Course: Dessert
Cuisine: American
Keyword: Angel Food Cupcakes
Author: Jaclyn