Overnight Cinnamon Roll Waffles – all the flavors of a cinnamon roll in easier to make waffle form! Prep the batter the night before then wake up the next morning and pour it in the waffle iron. 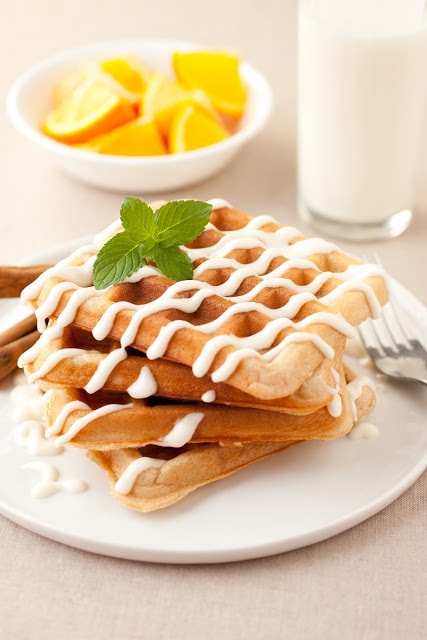 Growing up in my family, Christmas morning breakfast was always a big deal. Why? Because it was basically the only morning of the year my mom made a big homemade breakfast. It was one of my favorite parts of Christmas.

We would usually always have pancakes, eggs, hash browns, bacon and freshly squeezed orange juice, although I’m pretty sure my mom went with a pancake mix. I don’t think she loves cooking the way I do =).

Because of this tradition Christmas breakfast is still important to me, it’s such a highlight of Christmas. That’s why I’ve tried to post a few breakfast recipe options you could prepare for your holiday breakfast.

This time around I wanted to create a breakfast entree that could be prepared the night before and then cooked the next morning, because I know it’s not likely you want to wake up and spend the morning in the kitchen. You can prepare the waffle batter as well as the cream cheese glaze the night before. 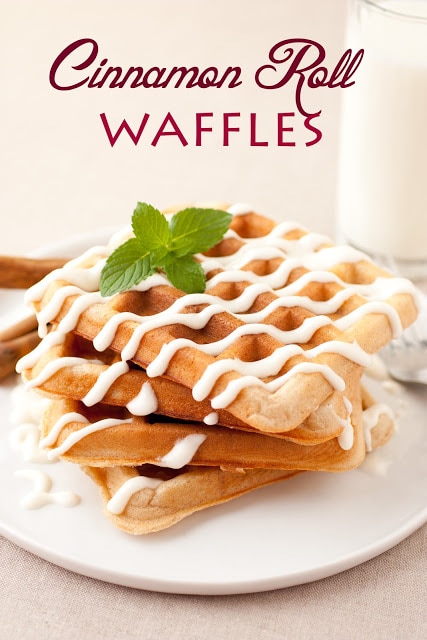 If you wanted even more indulgence you could also drizzle them with a brown sugar glaze (made with brown sugar, melted butter and some cinnamon – then I’d reduce the amount of cinnamon in the waffle batter) or you could mix about 1 tsp of molasses into the batter to give them a light brown sugar flavor like a cinnamon roll (I just didn’t think of it until after I’d prepared them =), but they were amazing the way they were).

Also, just wanted to mention the Cream Cheese Glaze is meant to be runny, like a glaze or similar to a syrup. It’s not as thick as frosting. If you want it thick just use less milk. Enjoy and Happy Holidays! 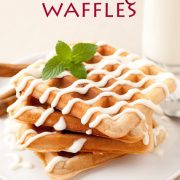 All the flavors of a cinnamon roll in easier to make waffle form! Prep the batter the night before then wake up the next morning and pour it in the waffle iron
Servings: 7
Prep15 minutes
Cook15 minutes
Ready in: 30 minutes