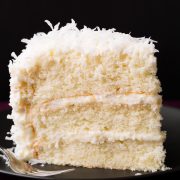 This Coconut Cake is one of the best cakes you'll ever make! It's light and fluffy, it's brimming with sweet coconut flavor and it's finished with a rich and creamy cream cheese frosting.  It's been a reader favorite recipe for years and it's one of my my families favorites!
Servings: 16 Servings
Prep40 minutes
Cook20 minutes
Cooling2 hours
Ready in: 3 hours