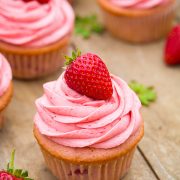 Have you ever seen cupcakes so pretty? These Strawberry Cupcakes are made with chunks of fresh strawberries in the cake batter and are topped with a luscious pink Strawberry Buttercream Frosting. These cupcakes are just bursting with flavor and would go down a treat at any celebration!
Servings: 12
Prep35 minutes
Cook20 minutes
Ready in: 2 hours

Frosting (double recipe if making for a double layer cake)