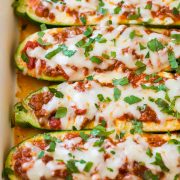 These easy lasagna zucchini boats are the perfect weeknight meal and one of my favorite ways to use zucchini! All the flavors of the classic lasagna without the extra carbs from the pasta, plus this version is a lot easier without all the traditional layering.
Servings: 8 Zucchini boats
Prep10 minutes
Cook40 minutes
Ready in: 50 minutes