Baked Pumpkin Churros. I repeat BAKED PUMPKIN CHURROS! Could there be a better fall treat?? They perfectly sweet and spiced and just over-the-top delicious! 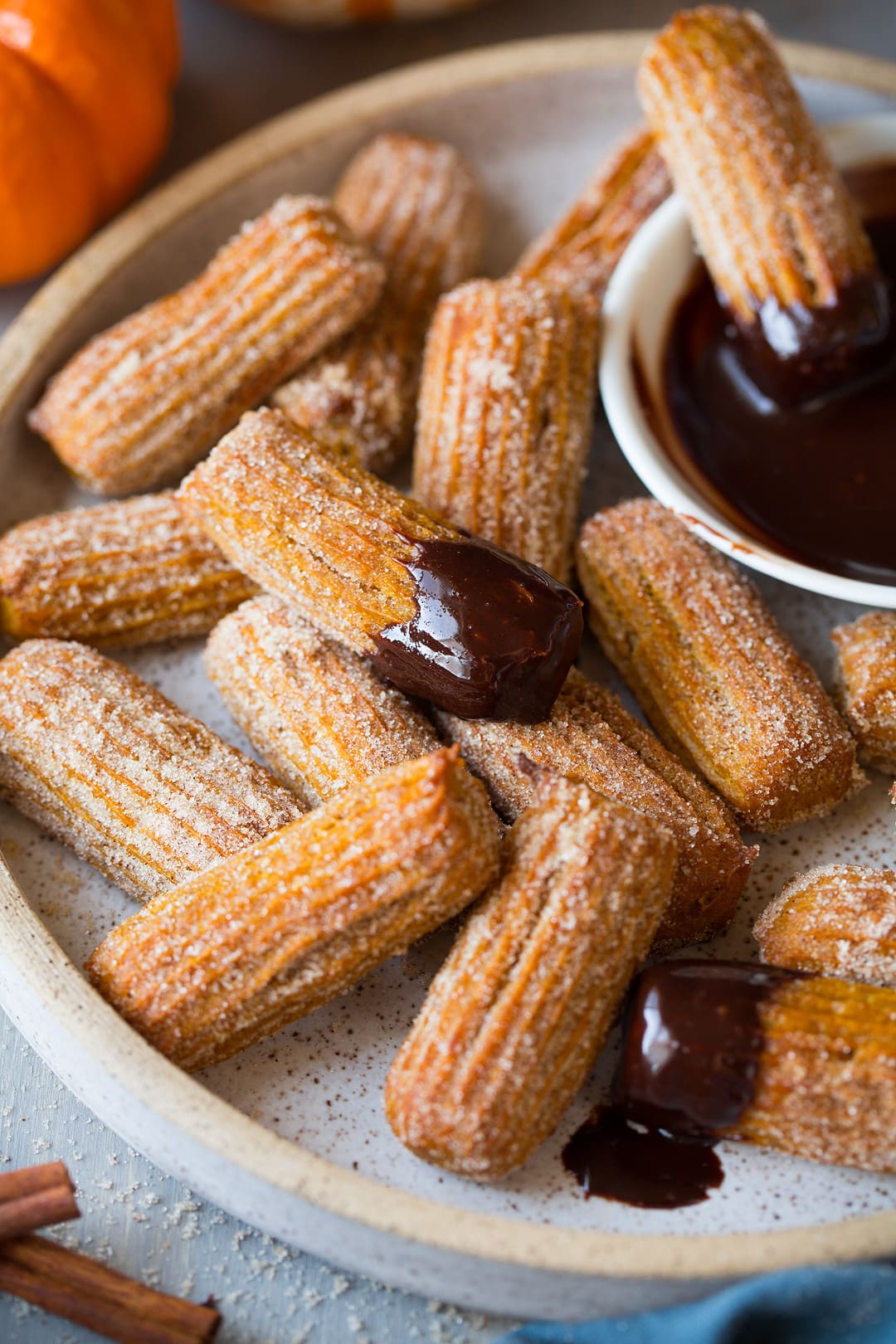 I created both a fried churro and baked all in the same day and I couldn’t believe how close they were to each other.

But I actually liked the baked version a little better because the fried version kept coming out a little gooey in the center because of all that pumpkin, and doughy pumpkin is no good.

I mean why didn’t I make these sooner?? No frying so no oily smell and mess yet you still get an incredibly irresistible churro that everyone will love!

This baked version is crisp on the outside and perfectly tender and moist on the inside and it’s generously coated in cinnamon sugar, all just the way a churro should be.

Then add the addition of pumpkin and autumn spice and no one can resist! 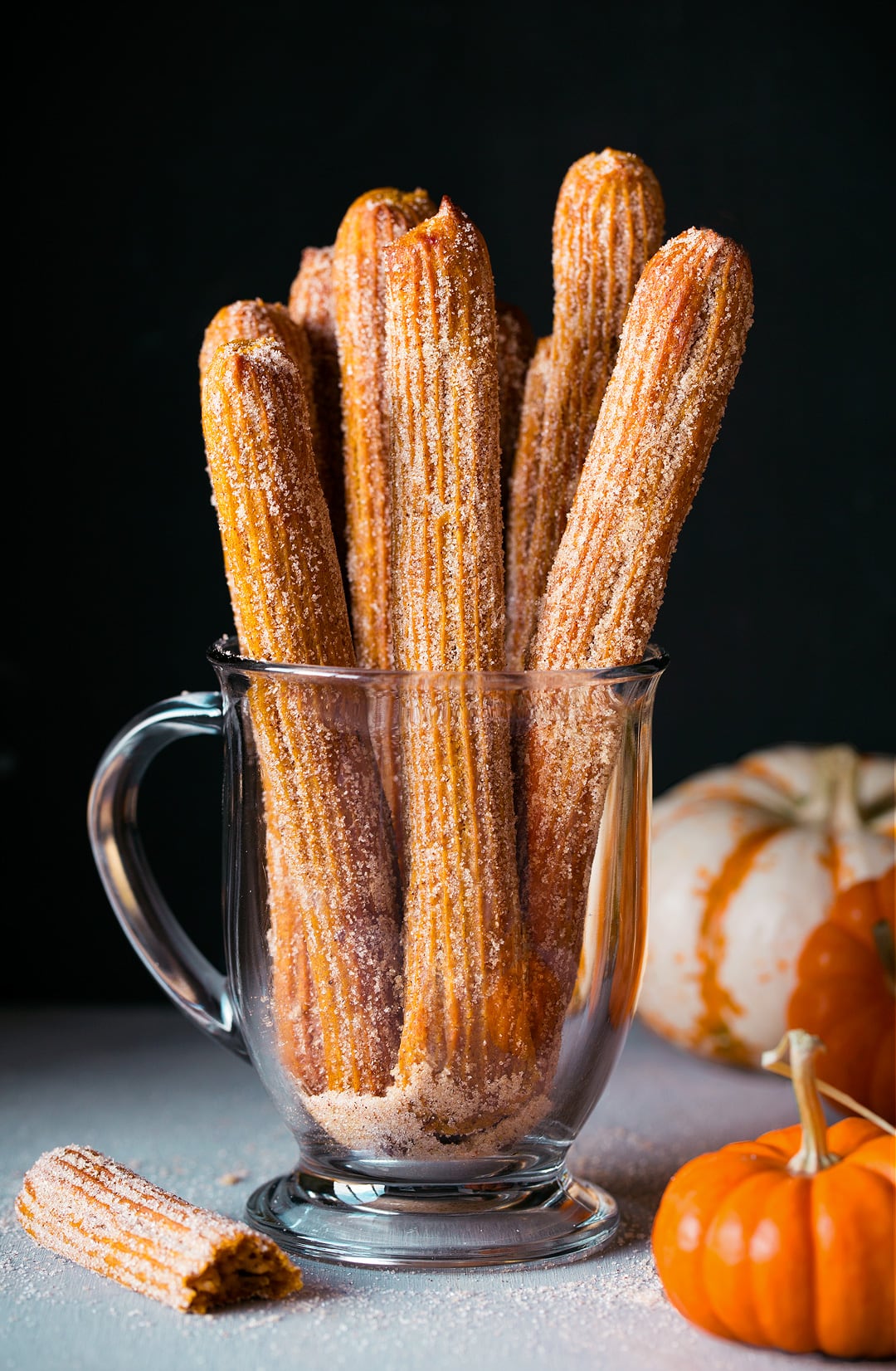 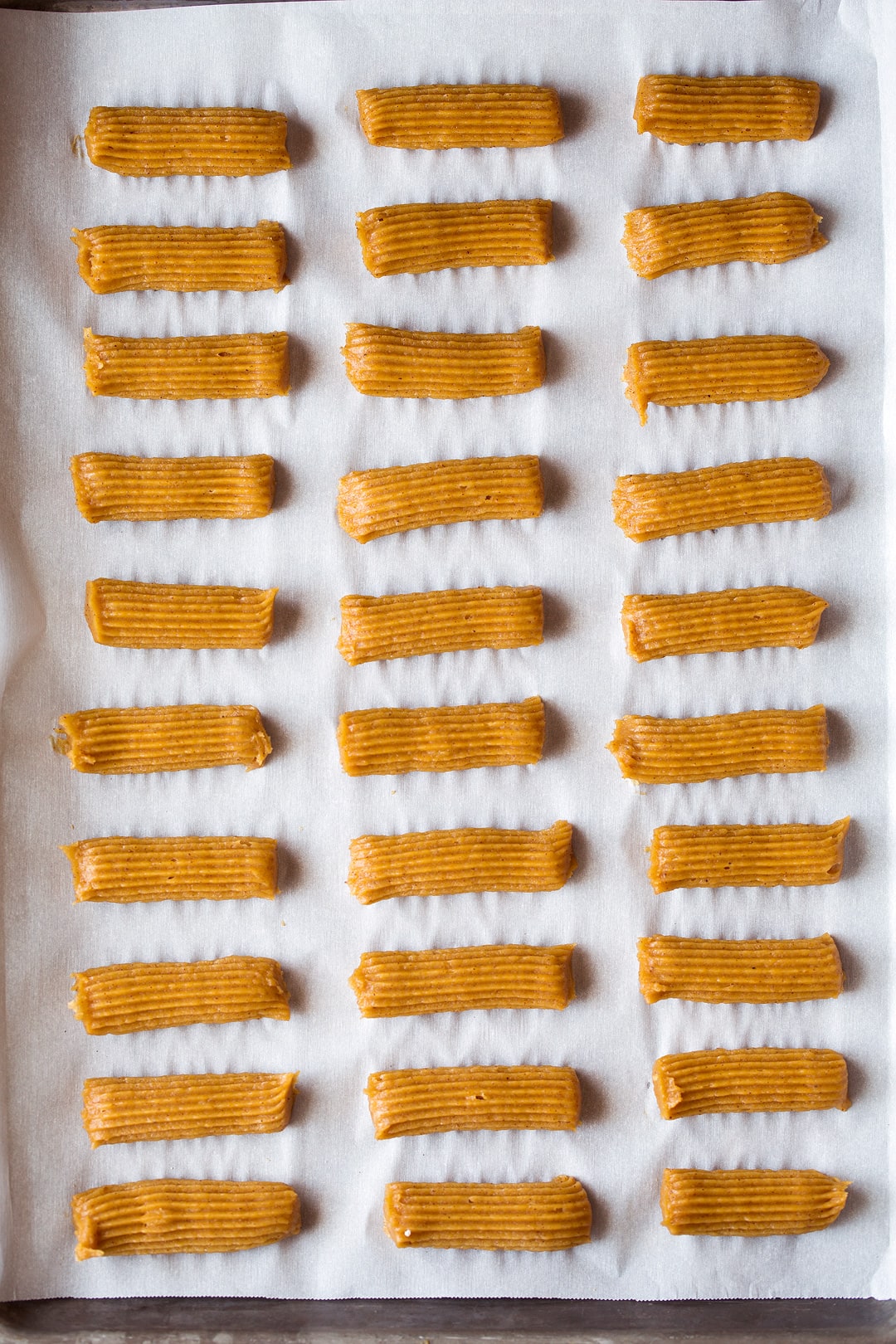 How to Make Pumpkin Churros 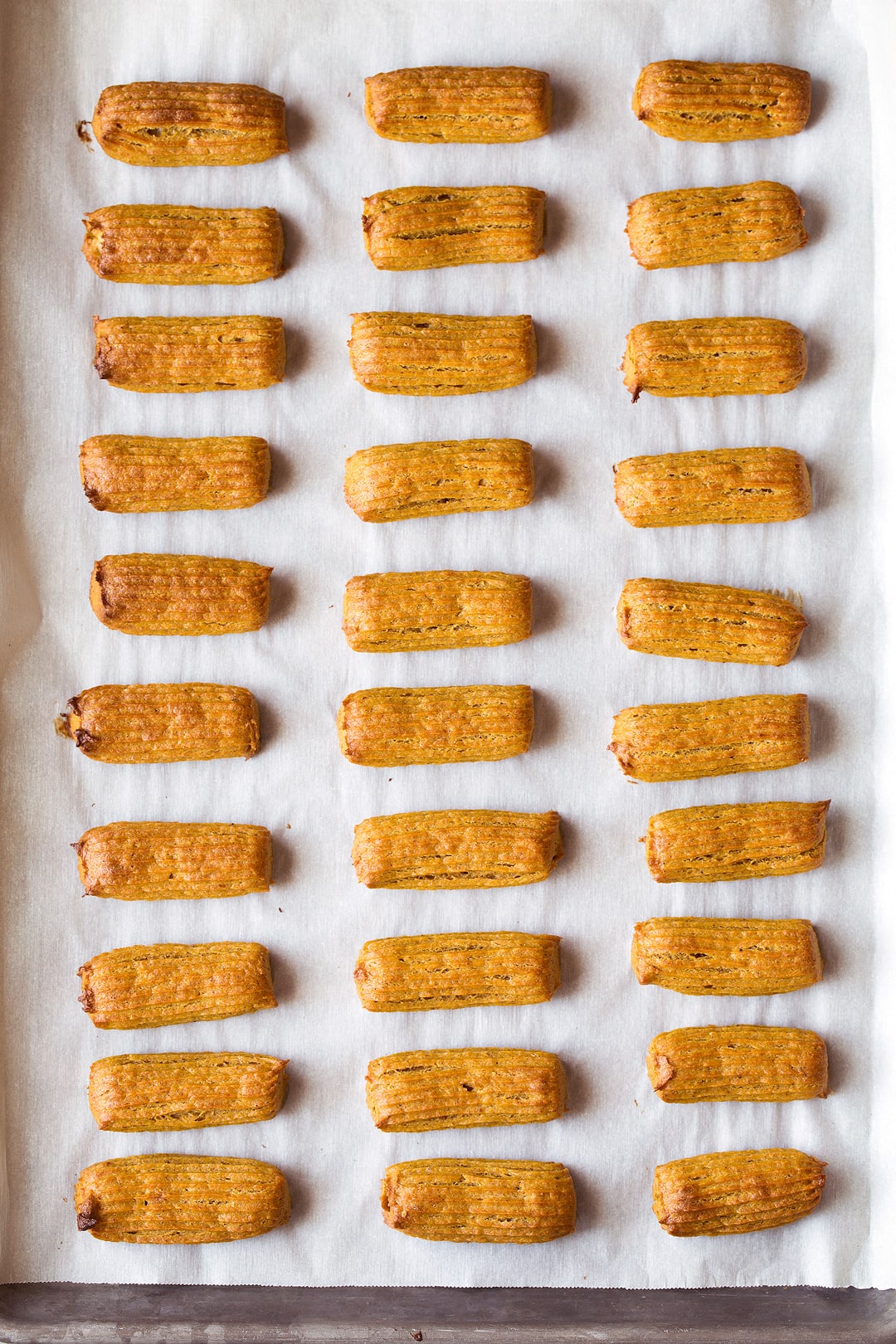 You can make them as minis or the more traditional longer version. I love both so if you want go ahead and make some of each.

What Should I Serve with Them?

For extra decadence serve with: 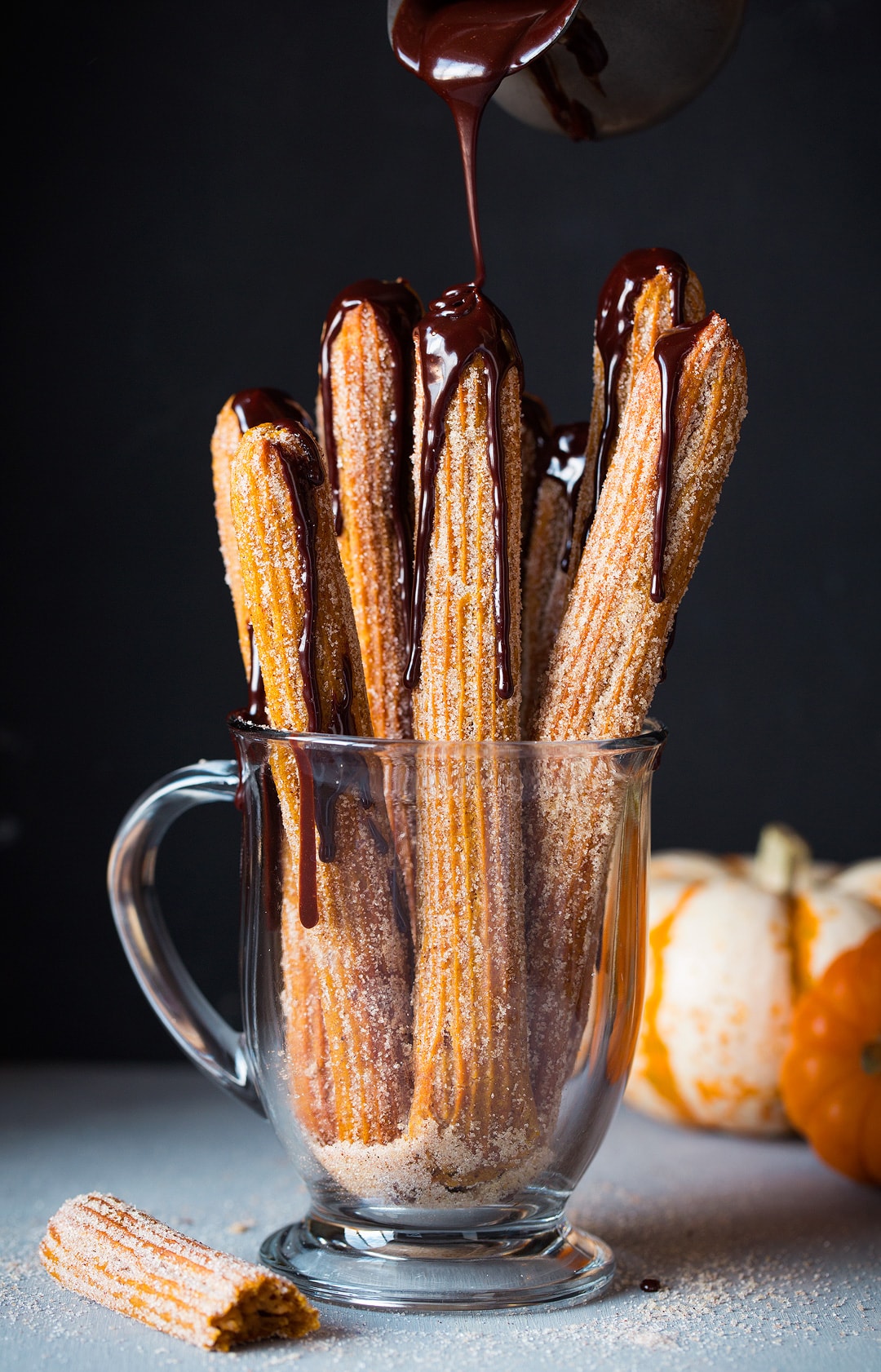 Tips for These Churros 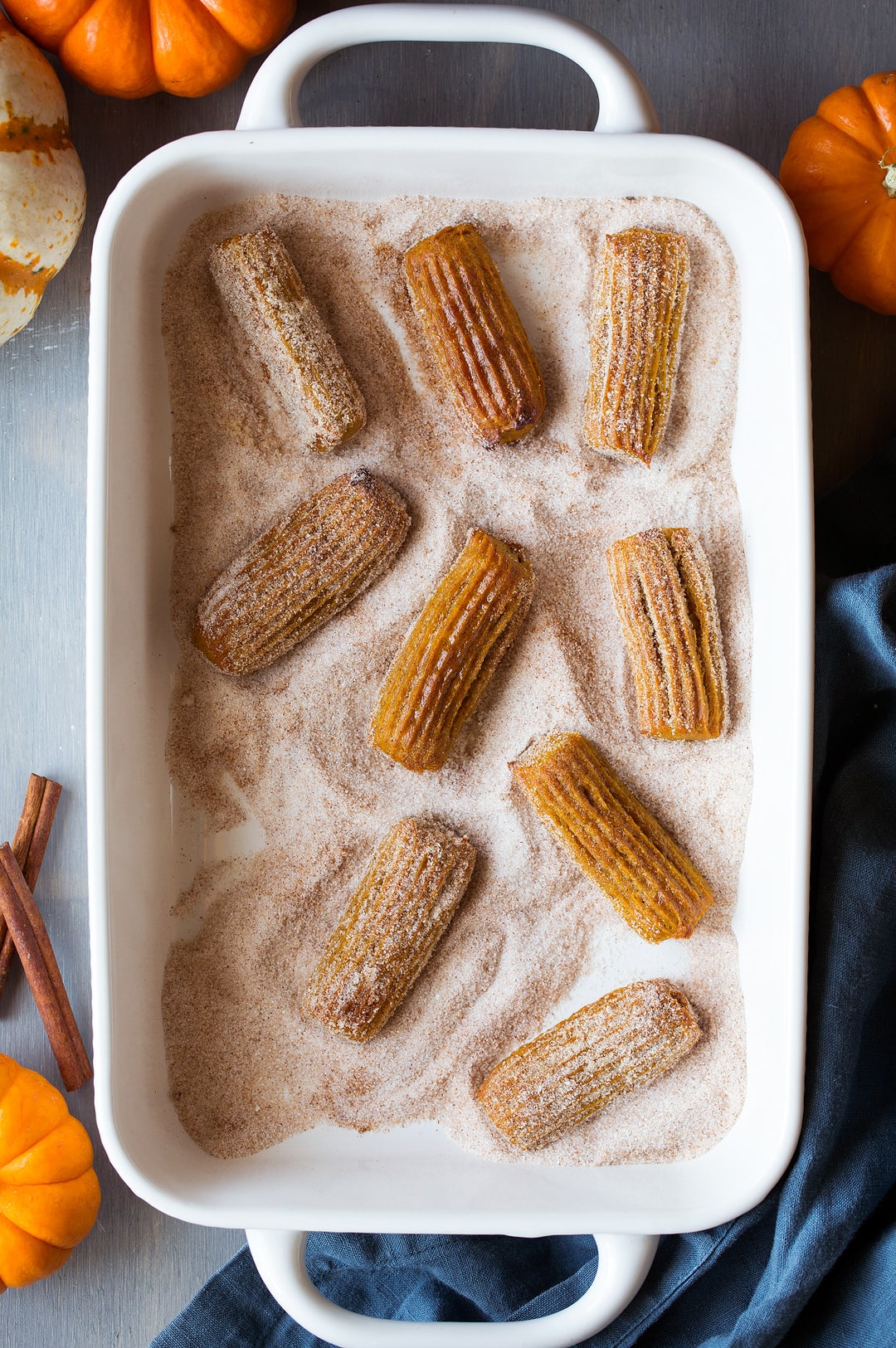 A Must Try Fall Recipe

I have a feeling they’ll be on repeat this fall season.

Have family or friends over to share because otherwise you will finish off a lot more than you planned on. I wonder how I know :).

When creating recipes like this one self control gets hard. It’s my job to make sure it’s extra fabulous so I had to keep taste testing :). 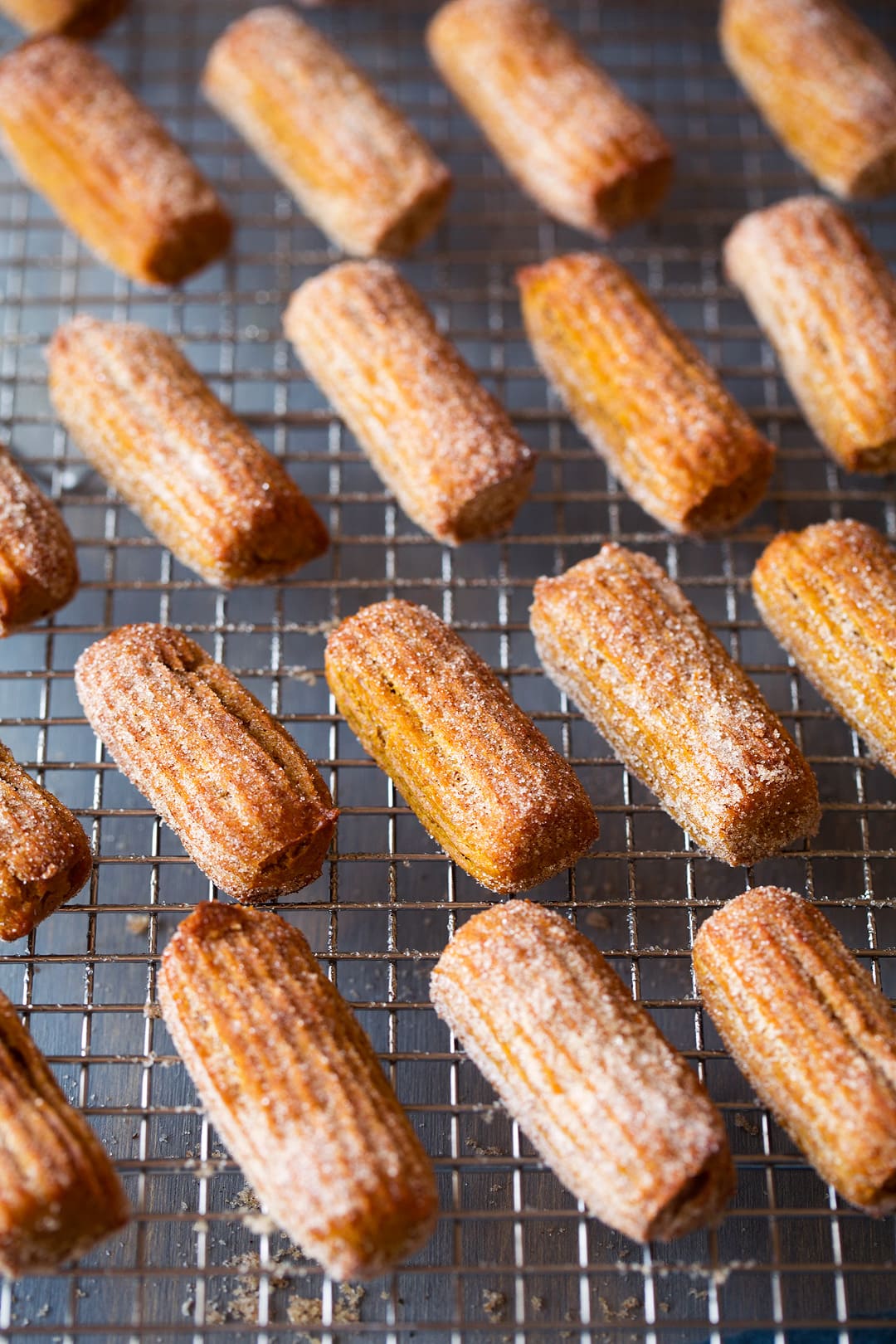 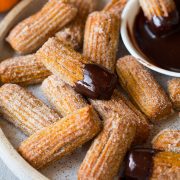 No oily mess or greasy smell, these delicious churros are baked instead of fried and they're just as good! Delicious autumn spiced pumpkin flavor in irresistible churro form. The perfect fall treat!
Servings: 12
Prep20 minutes
Cook30 minutes
Ready in: 50 minutes

*Note that recipe has been updated. I had a few readers comment that the dough was too runny so I reduced the liquid, cooked the batter and omitted the 2 minute resting period to give the eggs more of a head start, you could try just one egg and see if that is enough for you. I've made these three times with success so they should turn out perfect for you as well!
Nutrition Facts
Baked Pumpkin Churros
Amount Per Serving
Calories 170 Calories from Fat 72
% Daily Value*
Fat 8g12%
Saturated Fat 5g31%
Cholesterol 51mg17%
Sodium 63mg3%
Potassium 49mg1%
Carbohydrates 21g7%
Sugar 11g12%
Protein 2g4%
Vitamin A 1915IU38%
Vitamin C 0.4mg0%
Calcium 17mg2%
Iron 0.9mg5%
* Percent Daily Values are based on a 2000 calorie diet.
Nutrition values are estimates only. See full disclaimer here.
Course: Dessert
Cuisine: Mexican
Keyword: Pumpkin Churros
Author: Jaclyn