Taking pictures with one hand while holding a hand pie with the other – wouldn’t recommend it! Number one reason, you’ll want to just drop the camera and shove the whole hand pie in your face – yes I would definitely take this pie to the face if it meant I got to wipe it off and eat it :), and second how on earth do you focus without a free hand to adjust the focus?

Pain in the butt I tell you. But since I got to eat this, it was so worth it! I couldn’t believe how patient my 4 year old was when she became the prop assistant – when you have a pie as your reward I guess there’s a lot of things we could be patient with :). 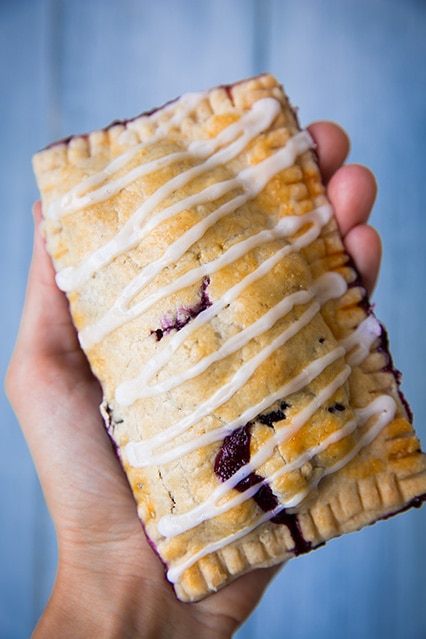 Have you ever made a pie crust with coconut oil? I did for the first time today and I actually really liked it. Basically, this turned out to be an unintentionally vegan recipe (although I did add an egg wash, but if you’d like to keep the recipe entirely vegan you could definitely omit it and replace it with a soy milk wash or a corn syrup plus a bit of water for a similar effect. Or you could just leave it off altogether).

The reason I chose to use coconut oil instead of butter or shortening in this recipe was simply because it’s a healthier alternative. If I’m going to serve these to my family for breakfast I don’t want them eating two sticks of butter to start the day :).

I also added in some more nutrition by replacing some white flour with oat flour. My kids never would have been able to tell the difference between these and an original version. I love when I can do that – sneak healthier foods into things and no knows the difference. I’m thinking you’ll likely say the same about these too.

The glaze for these is optional but I’d recommend that if you do omit it that you sprinkle a little bit of raw or granulated sugar evenly over the tops of the pies before baking. Enjoy! 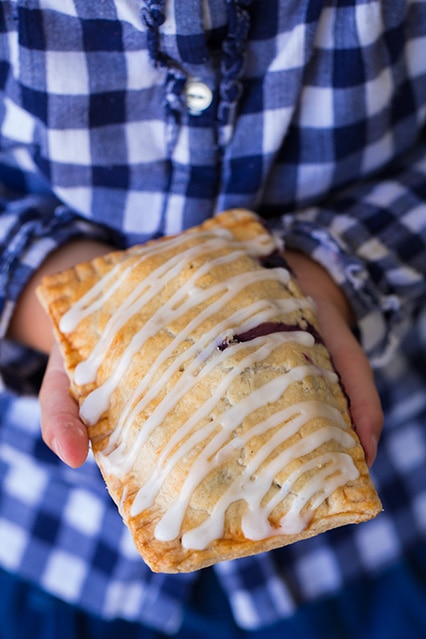 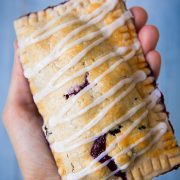 Desserts are always better in hand holdable form! These pies are made with a flaky crust and filled with a sweet berry filling.
Servings: 8
Prep30 minutes
Cook40 minutes
Ready in: 1 hour 10 minutes