Buttermilk Waffles are one of my favorite homestyle foods. It just doesn’t get much better than a tall stack of light, crisp, tender and completely satisfying homemade buttermilk waffles, slathered in butter and drenched heavily with warm maple syrup. 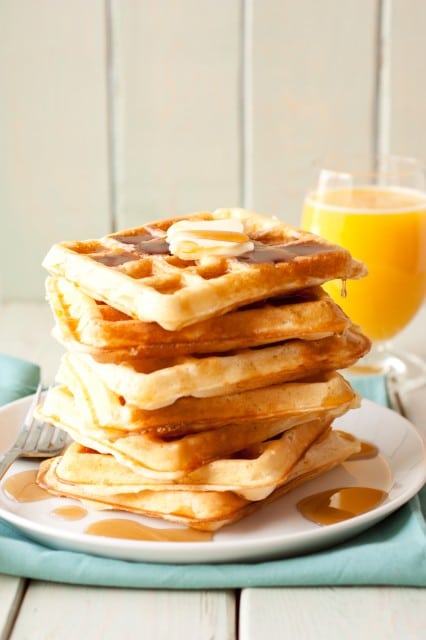 Breakfast is one of my favorite meals. Not necessarily morning breakfast but breakfast entrees. I love pancakes and buttermilk waffles and most of the time I eat them for dinner because I don’t like to start out my day with a heavy meal. I’ve had my favorite pancake recipe for a number of years but never really a favorite buttermilk waffle recipe, until I just made this one. 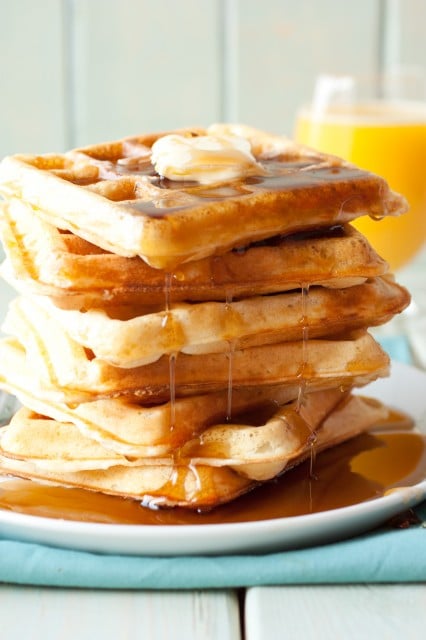 How I make Buttermilk Waffles

I use two oils because I like the texture and moisture vegetable oil gives but I like the flavor butter gives. Then of course buttermilk and vanilla are added for additional flavor, if you wanted you could even mix in some cinnamon.

I wanted a light waffle with a crisp exterior and a soft, moist interior. I noticed that Chef Pamela Anderson created a crispy waffle by adding cornstarch to her recipe so I decided to try it out in mine. It works wonders.

And be sure you don’t skip the egg white whipping step. It adds in lots of air bubbles which in turn equals a lot of fluff, resulting in a delicious, fluffy waffle.

These homemade buttermilk waffles are crisp right off the griddle but be sure to toss them in a warm oven on a cooling rack if you aren’t eating them immediately so they won’t soften. Also, don’t stack them (like those pictured) just until eating them or it locks in moisture between them basically and they get soggy. Slather them with butter and maple syrup. Sometimes the basics are simply the best. Enjoy! 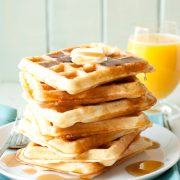