This is General Tso’s Chicken done right. Yes, the prep might be a bit lengthier than some of your simpler General Tso Chicken recipes, but I’m telling you, it is worth it. Enjoy! 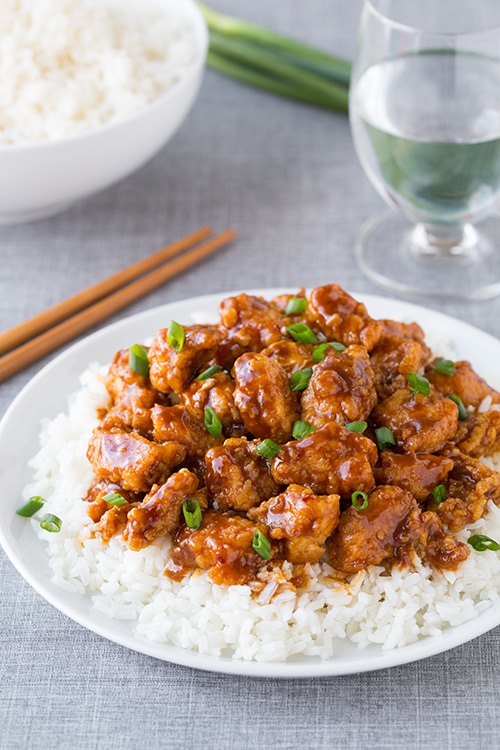 Yesterday I mentioned that I had a cashew chicken recipe fail that I ended up tossing down the drain. Well, that fail left me with a whole lot of white rice so I decided I better try out a different Asian-inspired recipe today. Enter: General Tso’s Chicken!

I’m happy to say this one was a complete success! I could have probably finished the entire batch myself. The flavors, the textures, everything, I just loved my homemade General Tso’s Chicken.

Maybe it has something to do with the fact that this one was fried in oil and the other was only sautéed in a few tablespoons of oil. When it comes to Chinese food I think I prefer it take-out style, deep fried in oil.

It’s just so much better that way! I love how that fried to perfection, golden crispy coating begins to soak up all that saucy goodness.

This General Tso’s Chicken recipe is simply amazing thanks all the exciting flavors going on. You’ll love the depth of flavor the rich hoisin or General Tso sauce adds, and the freshness the ginger and garlic offer to this dish.

If you’ve ever wondered if you could make General Tso’s Chicken at home, this recipe is for you!

What is General Tso’s Chicken?

If you’ve never had this classic Chinese take-out dish, you’re missing out! Essentially, General Tso’s chicken is a dish comprised of deep-fried chicken pieces smothered in a slightly spicy sauce.

Unlike other Chinese chicken dishes, General Tso’s chicken typically isn’t made with any type of vegetable. So if you want fresh veggies with your meal, you’ll need to prep those separately.

And for the chicken, you’ll need:

How to Make General Tso’s Chicken

How Spicy Is This Recipe?

The spiciness of this Chinese chicken totally depends upon how much crushed red pepper flakes you add in. If you don’t like spicy foods, add less than the amount listed in the recipe.

Do I Have to Deep Fry the Chicken?

Technically, no. You can pan fry the chicken with just a little oil. However, if you don’t deep fry the chicken it won’t be as crispy as what you get from a Chinese restaurant. 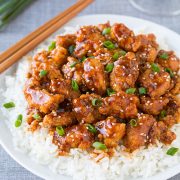