Ham and Bean Soup – a homestyle, hearty and delicious soup that couldn’t be easier to make! It requires minimal ingredients including a leftover ham bone, dry beans, some veggies, herbs and broth and the slow cooker does just about all of the work.

It’s one of those dump and go soups that’s perfect for busy days and a great way to use up a leftover ham. 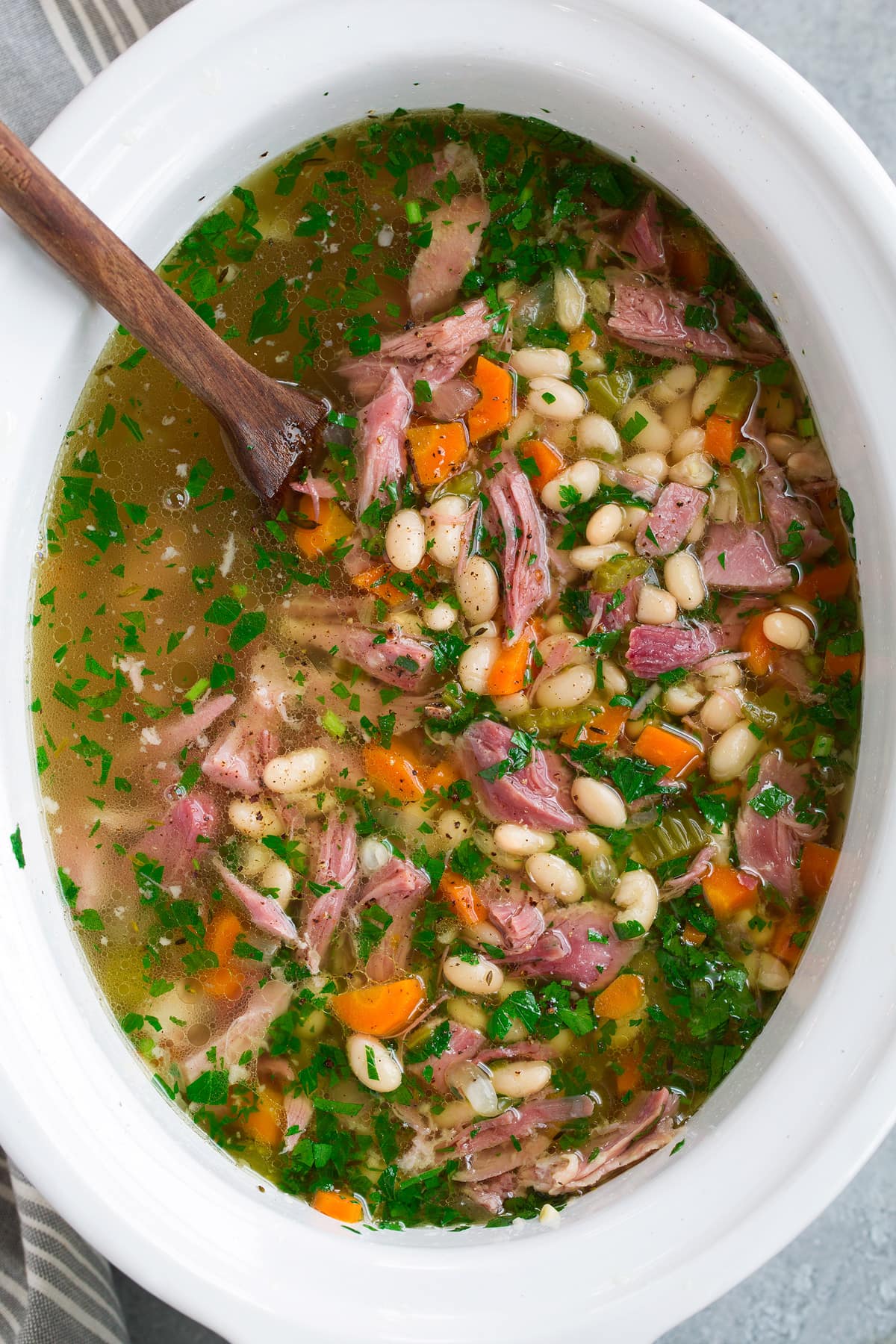 Ham and bean soup was one of my mom’s go-to dinners growing up. Almost every single Sunday she made roast beef or ham and so of course when it was ham that always meant a leftover ham bone.

My mom had to feed 6 kids on a very tight budget so that often meant she made the most of the leftover ham bone and made ham and bean soup the next day. It was also a great option for her because she was a single working mom and it’s a recipe that requires minimal effort.

Here go-to method was on the stovetop but I prefer this slow cooker set-and-forget method and I love how the ham comes out so unbelievably tender.

This soup is so comforting and though it only requires a few simple ingredients it has such a satisfying flavor. Just don’t forget a lot of the flavor comes from the ham bone so I don’t recommend using ham without the bone.

Serve it with fresh bread or crackers and you’ve got a perfectly comforting dinner, just like mom or grandma used to make! 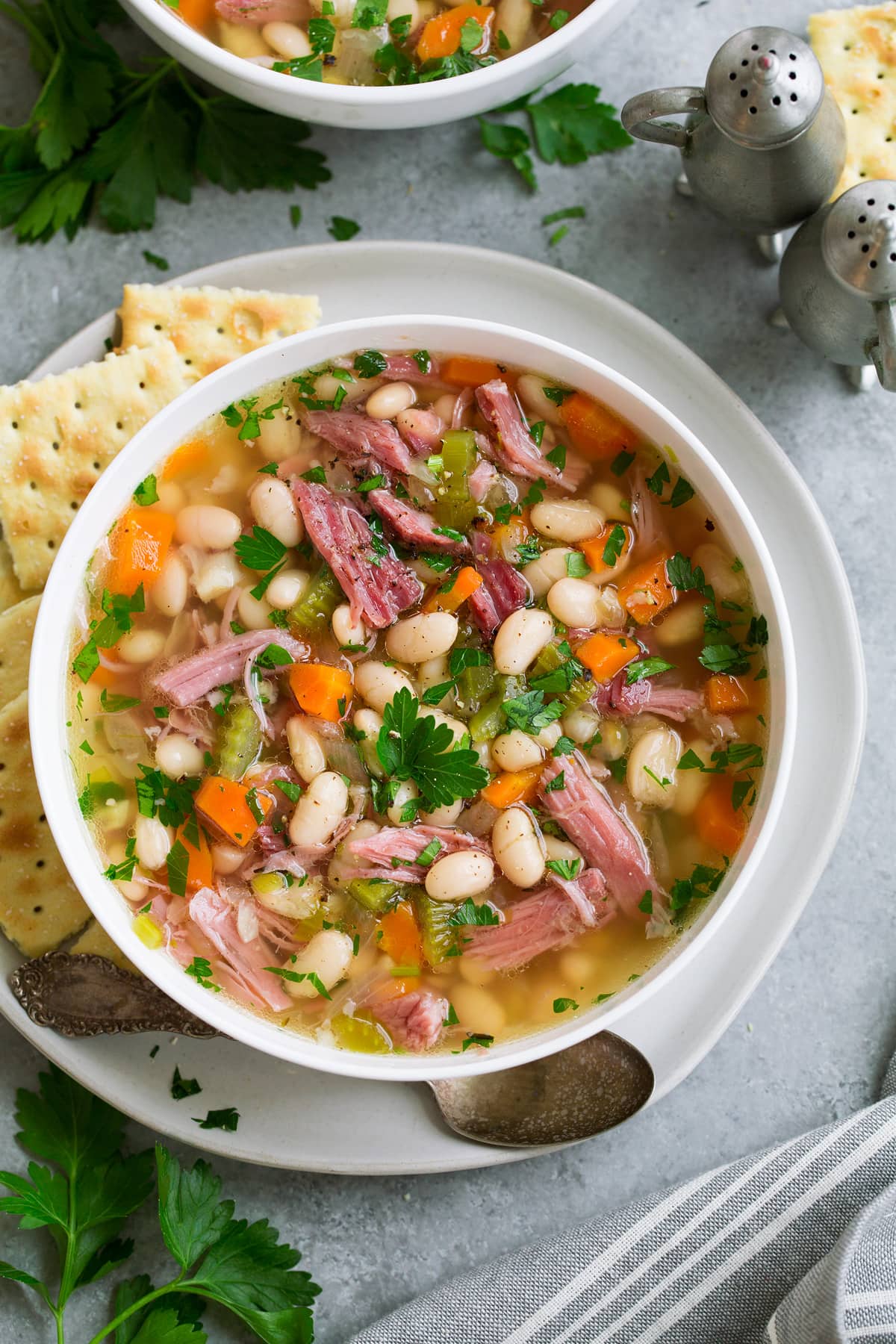 What Ingredients go into Ham and Bean Soup? 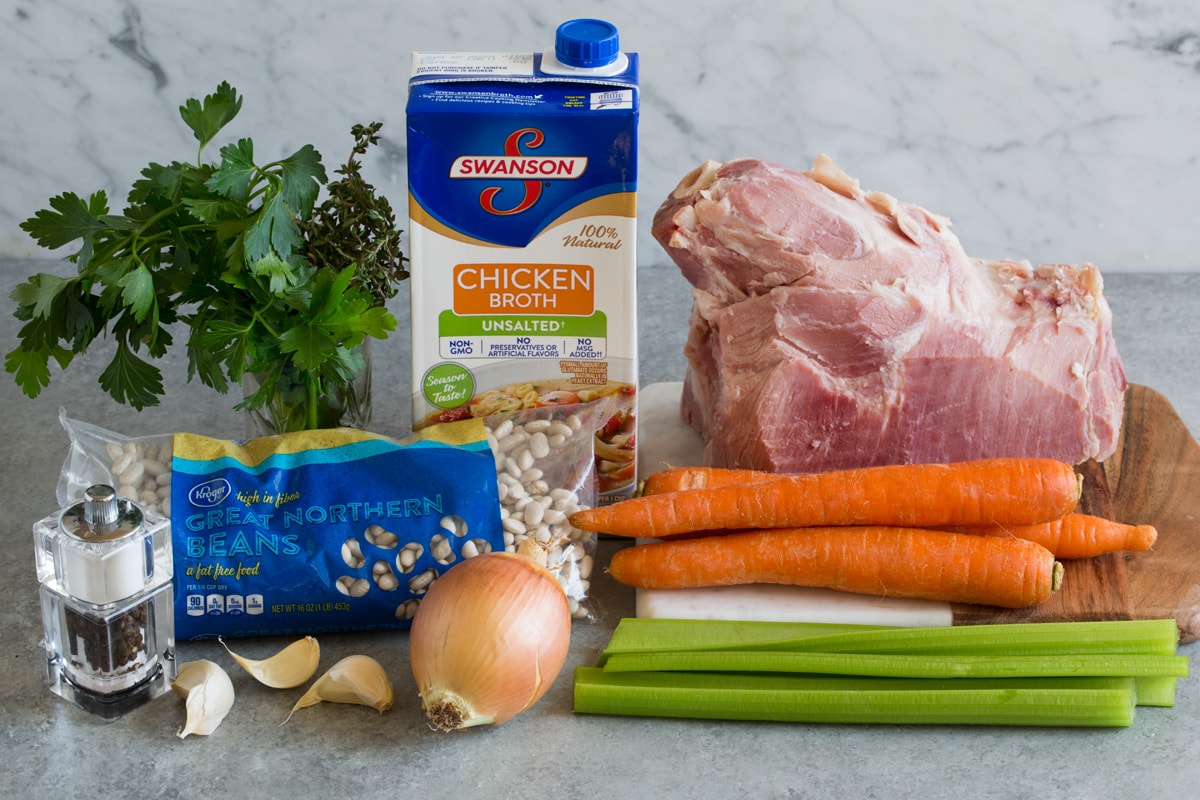 How to Make Ham and Bean Soup in the Crockpot 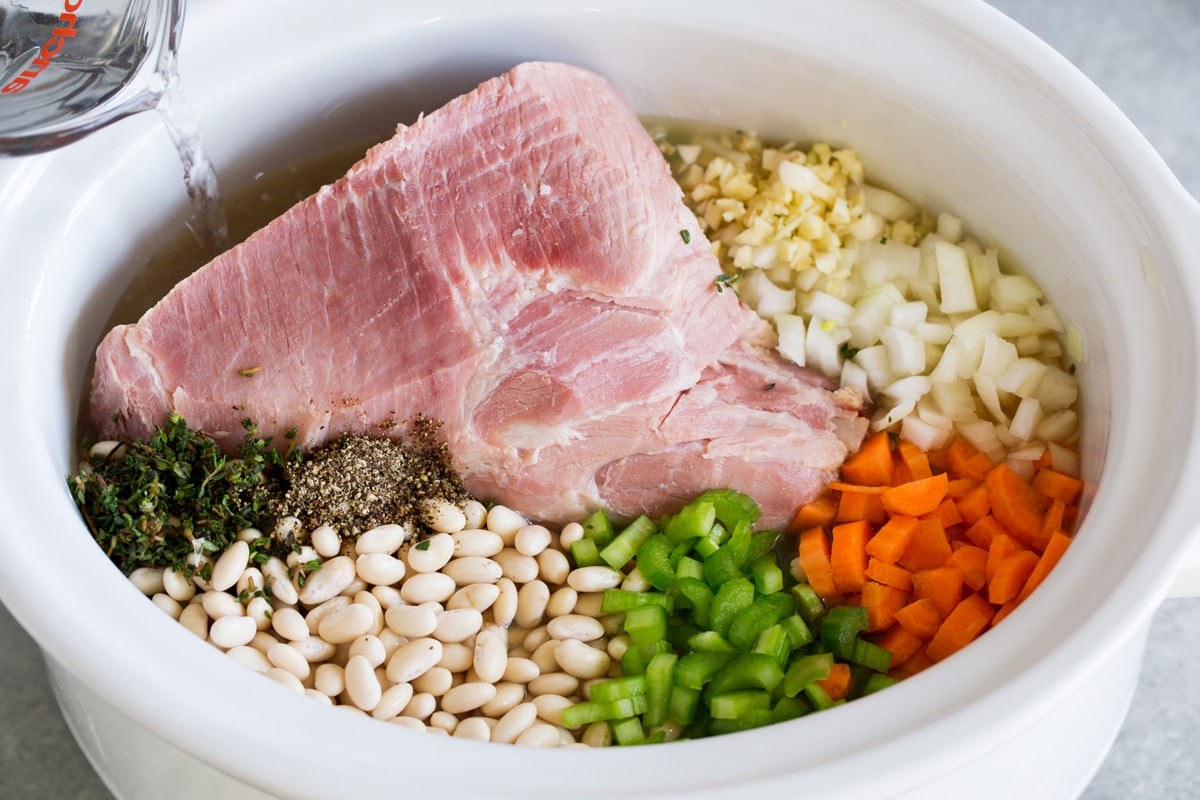 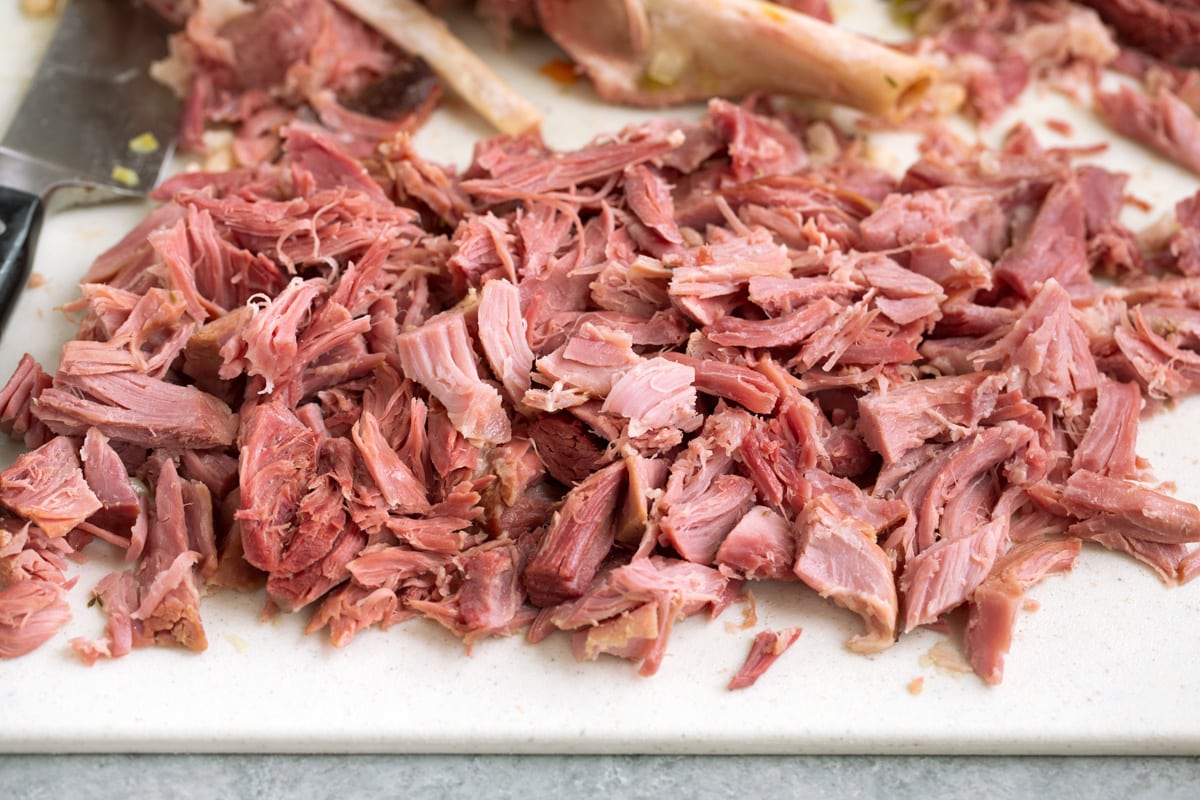 Can I Freeze Ham and Bean Soup?

Yes this soup should freeze well for up to 2 months. Thaw overnight in the refrigerator then reheat on the stovetop or in the microwave.

What If I Don’t Have a Leftover Ham Bone?

Ham shanks will work as well if you don’t have a leftover hame bone. I like the ham option though because I can usually get about 3 meals from one ham which only cost around $10.

The first meal of ham, mashed potatoes and ham gravy the the second a ham and cheese salad with ranch or a baked Denver omelet with pancakes, and the third this ham and bean soup. 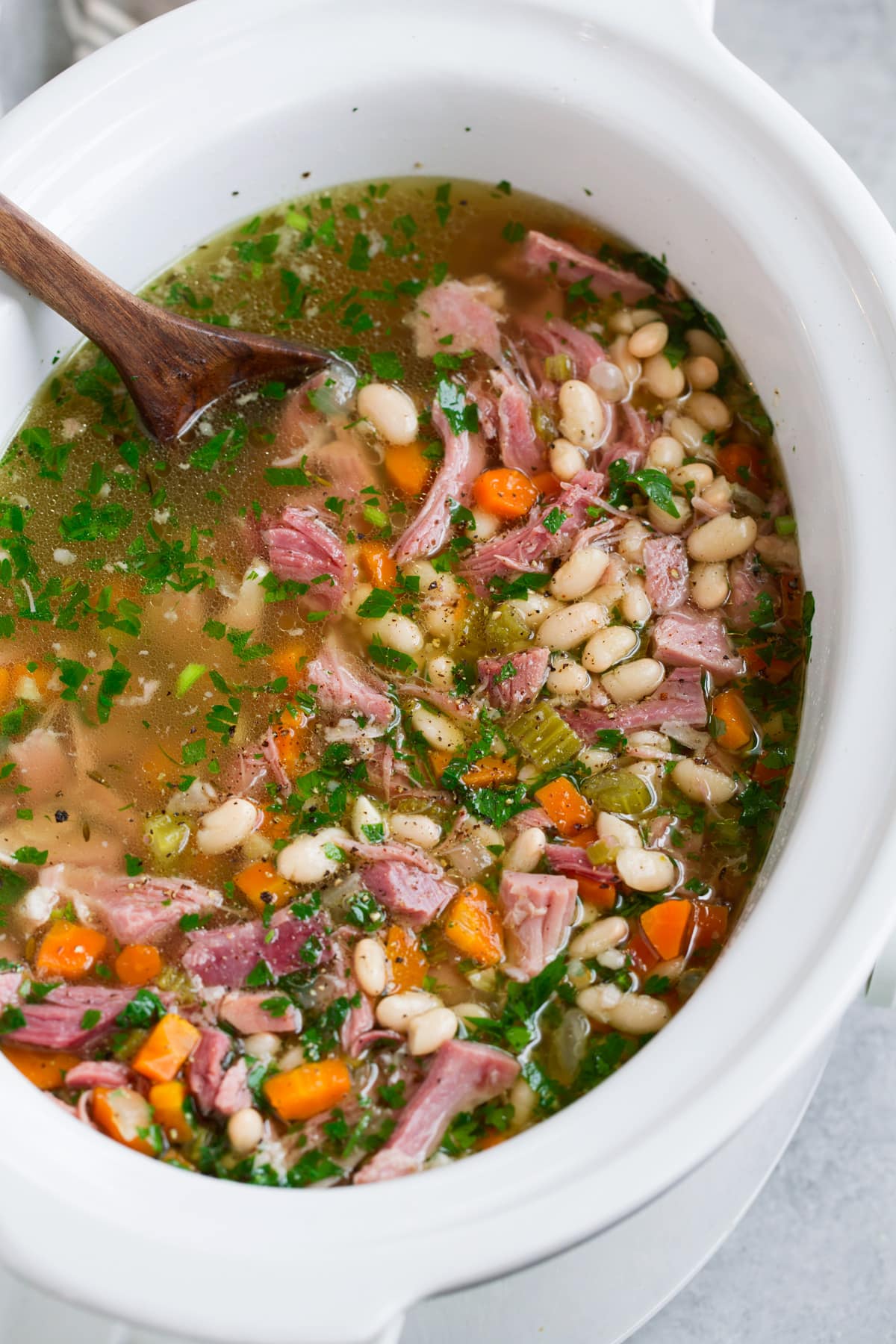 How can I Cook Ham and Bean Soup on the Stovetop? 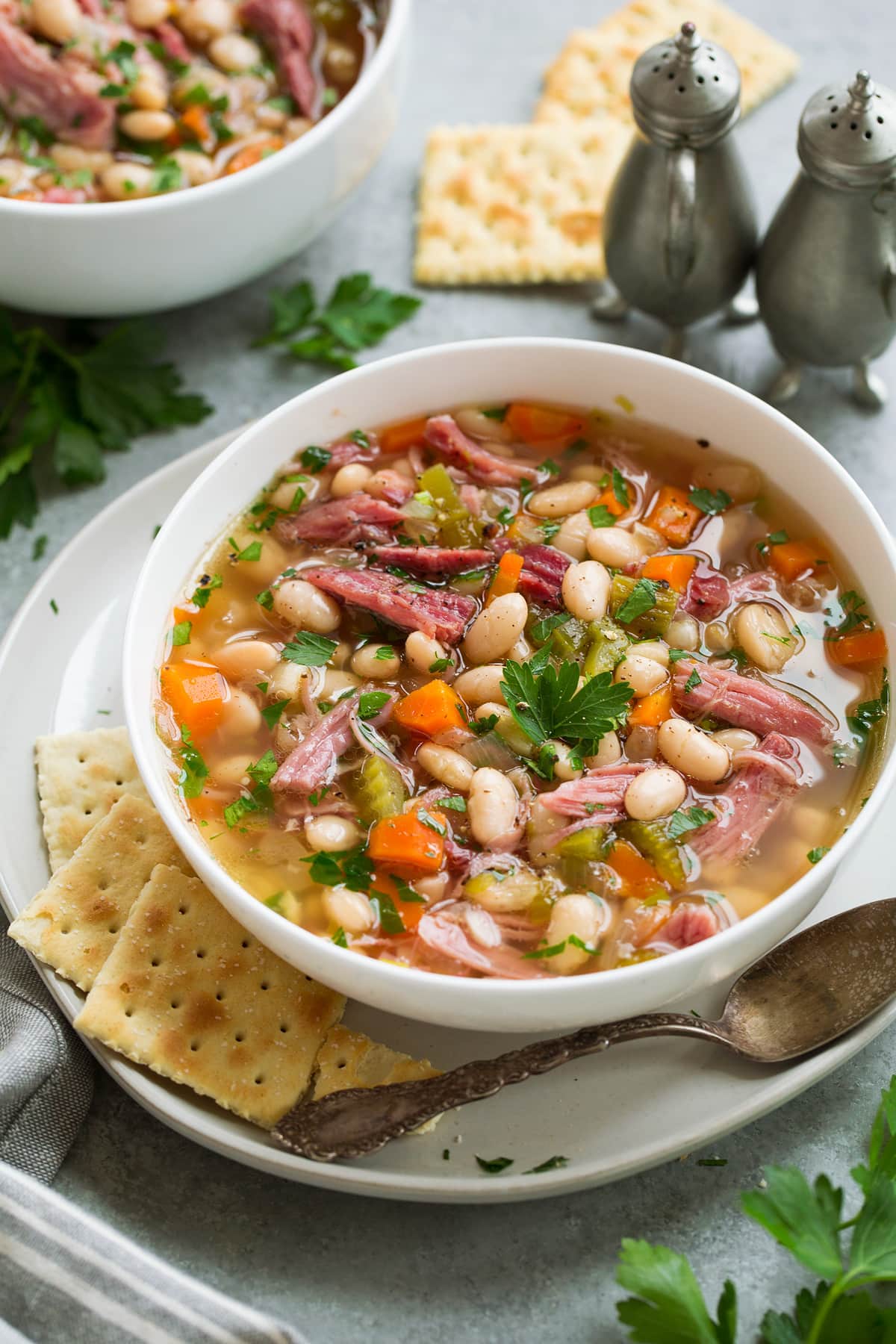 A homestyle, hearty and delicious soup that couldn't be easier to make! It requires minimal ingredients and the slow cooker does just about all of the work. A great recipe for busy days and great way to use up a leftover ham bone. Makes about 14 cups.

*Remember ham can be on the salty side so I like to season lightly with salt at the beginning then add more at the end after the salts have soaked from the ham into the soup.