This Orange Chiffon Cake is made up of three soft and fluffy layers of orange chiffon cake, which are layered with a creamy, zesty orange filling. It’s finished off with a delicate, sweet meringue that’s been toasted to golden brown perfection. This is a cake not to be forgotten! 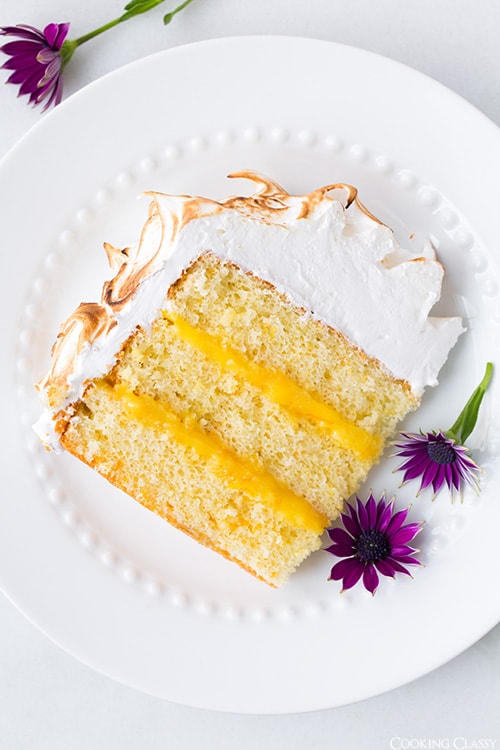 This recipe is dedicated to a special couple that I wish I could meet. I had a reader named Allee send me this e-mail last week (and I just couldn’t resist making it, so I had to fit it into my schedule). And with her permission I share a portion of her e-mail:

“I visit an elderly couple who are living in a nursing home here in Stillwater, OK at least once a week. Their names are Evan and Bethel [last name withheld], and they have been married for 71 years. Bethel is 92 years old, and Evan in 95.

They are still so in love with each other, and they are the most precious people I have ever met! Bethel was famous for her orange chiffon cake when she was younger, and she won a blue ribbon for it at the state fair (she was very proud of this cake)!

She described it to me as an orange chiffon cake with an orange frosting/filling between the layers, and the whole cake was topped with a meringue and (I think) slightly browned in the oven.

While she was telling me about this cake, I immediately knew I wanted to bake it for Bethel and Evan to deliver it to them on Valentine’s Day as a little piece of nostalgia :) I have searched for recipes online and can’t seem to find what I’m looking for.

All of Bethel’s recipes were lost during the moving process into the nursing home. I was hoping I could present you with this little mission to recreate something that would be so special for two people who have been an incredible blessing to me.”

So, how could I say no? First to such a sweet girl, second to such a loving couple (not to mention this cute lady who no longer has her recipes. I can’t imagine losing all my recipes!), and third to this cake that sounded unbelievably delicious.

Allee, here are the results of what I’ve come up with. I hope it’s close!

What is Chiffon Cake?

This elegant cake is simply divine. It’s made up of three soft and fluffy layers of orange chiffon cake, which is given its bright, vibrant orange flavor from both plenty of fresh orange juice and fresh orange zest.

Then, it is layered with a creamy, zesty orange filling that is very similar to a curd but not quite as tart and thick.

Lastly it’s finished off with a delicate, sweet meringue that’s whipped into those lovely peaks and swirled over the entire cake and toasted to golden brown perfection. This is a cake not to be forgotten! 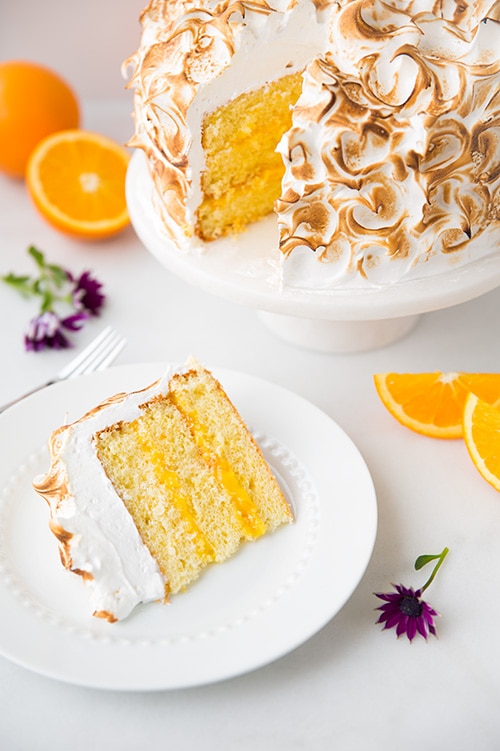 This show-stopping orange chiffon cake requires quite a few ingredients, but I promise it’s worth the effort! Here’s what you’ll need for this cake:

For the orange filling: 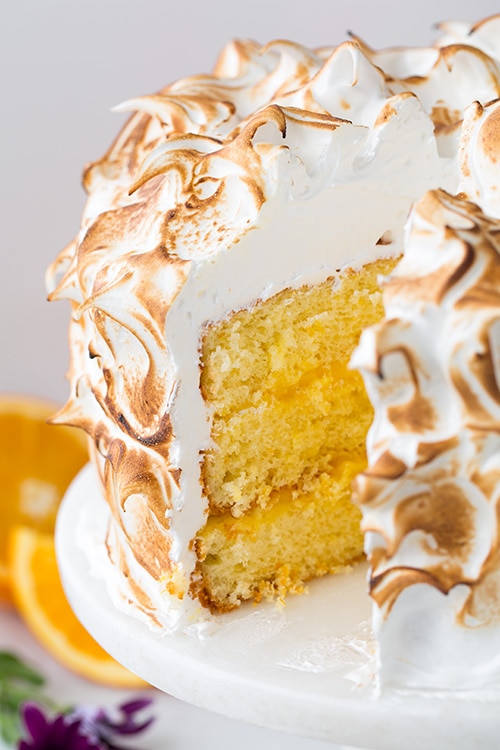 How to Make Orange Chiffon Cake

Can I Use Store-Bought Orange Curd in This Cake?

Yes, although the flavor of this orange chiffon cake won’t be quite right. Orange curd is slightly thicker and more tart than the orange filling used in this orange cake recipe, but store-bought will work if you’re in a real time crunch. 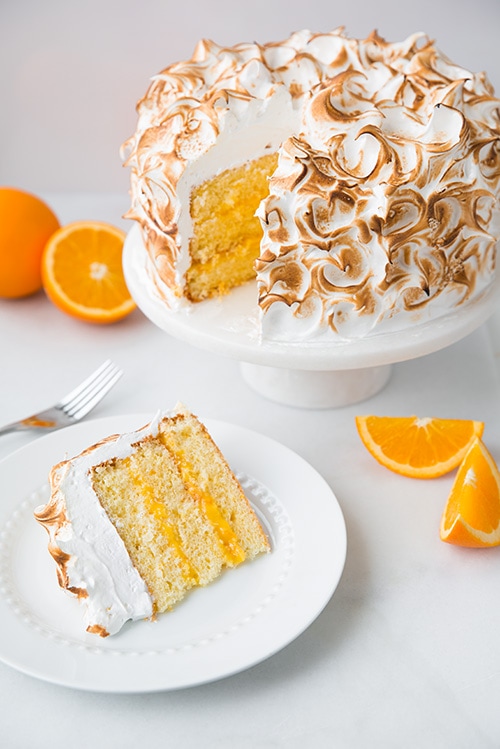 How to Store Orange Chiffon Cake

This layer cake should be served immediately or stored covered in the fridge. When you’re ready to serve this cake, let it first come to room temperature before slicing it.

Congratulations Bethel and Evan to both a long, prosperous life and marriage! 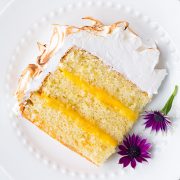