Cilantro Lime Salmon is such an exciting way to make salmon! It’s boasting with so much fresh flavor and who could resist that sauce! Not to mention you can have this ready in 20 minutes, can’t beat that. 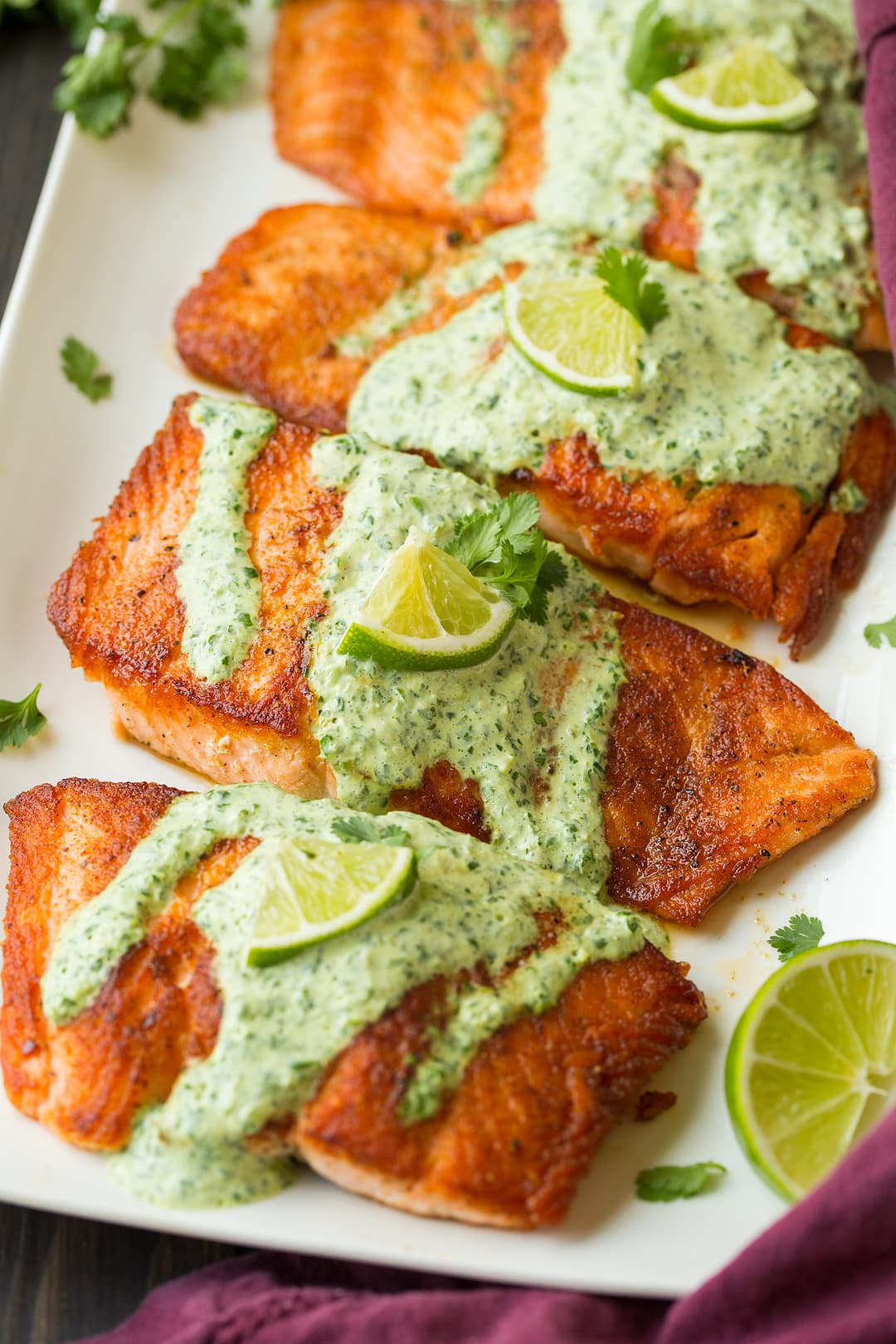 Lately I’ve been obsessed with just searing the salmon in a pan. I think it may actually be my choice method of cooking it — with grilling in a close second.

I just love the way it gets this perfectly seared crisp crust on the exterior while the interior stays perfectly tender and doesn’t dry out. I also love the pan searing method because it’s one of the quickest. No preheating an oven or grill and it’s ready in about 7 minutes.

This cilantro lime salmon is packed to the max with flavor thanks to a simple light rub, which consists of cumin, coriander and cayenne pepper, then it’s topped with the simplest fresh sauce, which consists of sour cream, cilantro, lime juice, green onions and garlic. All good things right?

I knew this was going to be good, but it was even better than I was expecting. If you like salmon and easy, quick recipes then please try this pan seared salmon recipe! I’m really just obsessed with how delicious it is! 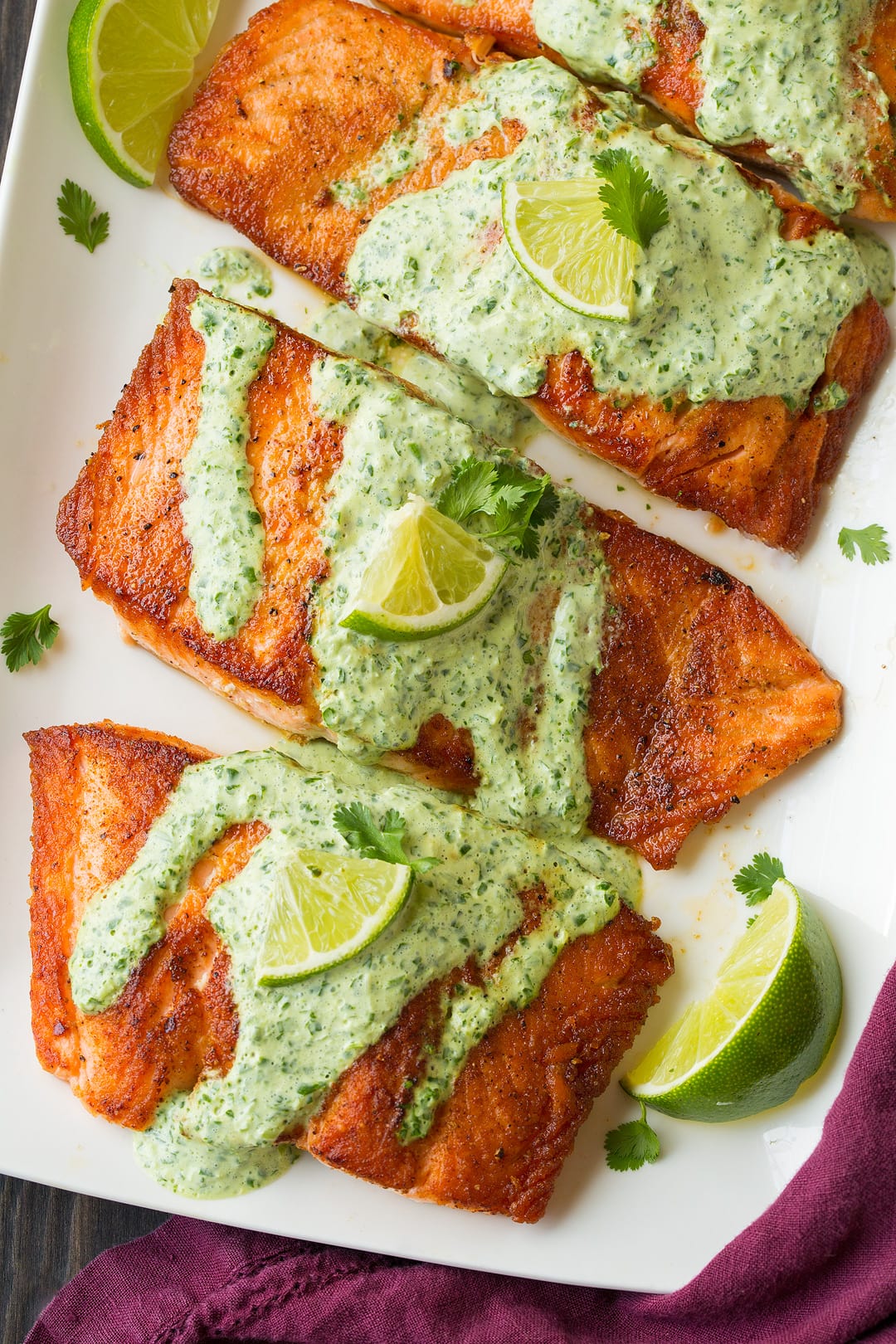 This recipe consists of a simple pan seared salmon and a flavorful cilantro cream sauce. Here’s what you’ll need to make both:

How to Make Cilantro Lime Salmon

Never cooked salmon in a pan before? Don’t fret, it’s easy! Here are the basic steps for how to pan sear salmon:

How Long to Pan Sear Salmon

I used four 6 oz. salmon fillets in this cilantro lime salmon recipe and cooked them for roughly 4 minutes on one side and 2 – 3 minutes on the other. 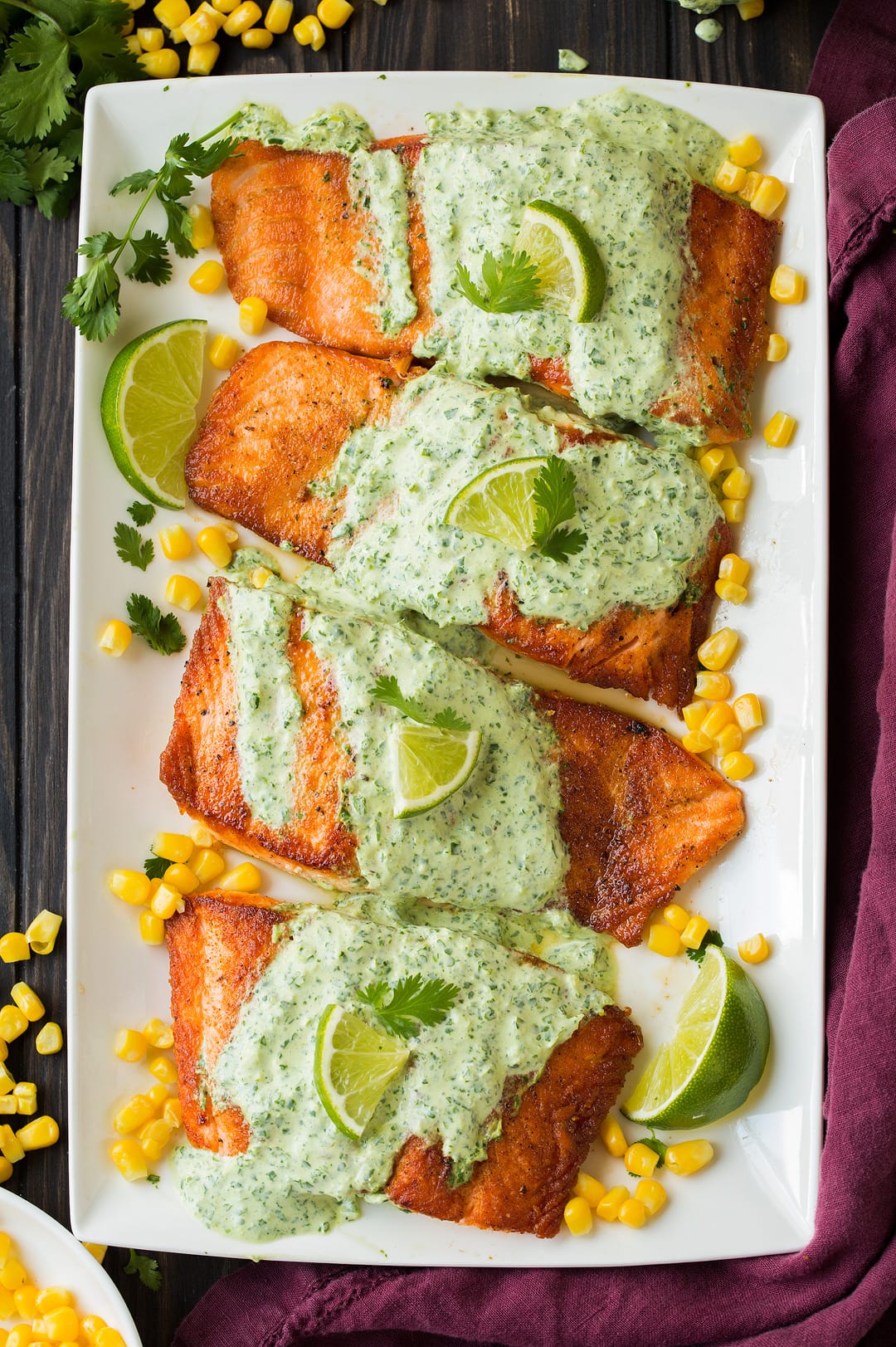 Can I Use Greek Yogurt Instead of Sour Cream?

I bet you could, but your cilantro lime sauce wouldn’t be as rich. If you use Greek yogurt, I recommend using whole Greek yogurt rather than low-fat.

What to Serve with Cilantro Lime Salmon

This cilantro lime salmon pairs nicely with lots of fresh side dishes! A few of my favorite salmon sides are: 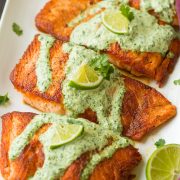 This is such an exciting way to make salmon! It's boasting with so much fresh flavor and who could resist that sauce! Not to mention you can have this ready in 20 minutes so it's perfect for a quick dinner.
Servings: 4
Prep10 minutes
Cook8 minutes
Ready in: 18 minutes