Sweet Pork – this version is made in the slow cooker and it’s perfect for adding to tacos, burritos, quesadillas and more! It’s deliciously flavorful and super tender, just like Cafe Rio! 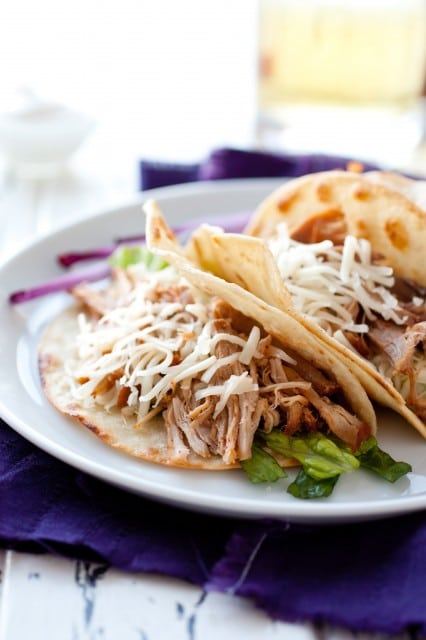 Let me begin by saying, I never thought I’d be dedicating a post to sweet pork. Ever. I used to hate the stuff.

My husband loves it, so when we first got married I was still in the try real hard to impress him phase, so I tried making several different sweet pork recipes. Every time it was so hard for me to choke it down, because it was like eating a piece of candied pork inside a taco.

It was far too overly sweet, not sweet in a good way at all. It was a weird kind of sweet. I sacrificed about eight too many times and made it for dinner because he liked it, then I finally decided; this is so lame, why am I making and eating something I can hardly choke down?

Several years have gone by since. We frequent a local “Mexican” (I wouldn’t really call it Mexican but it’s still very good) restaurant called Cafe Rio and my husband, of course, often orders one of their Sweet Pork Barbacoa entrees.

I decided to give it a second chance and I tried his sweet pork tacos and I actually found I liked it enough to order one for myself on our next visit.

After trying it I decided it’s not anywhere near as sweet as some of the Cafe Rio knock off recipes out there. That is why I decided to come home and make my own rendition.

This is one of the easiest recipes ever! Yes you could brown the roast in a skillet in a bit of oil first, and you could replace the onion and garlic powder with fresh sauteed onions and garlic, but that would remove much of the simplicity of this slow cooker recipe.

To me a slow cooker recipe is one that you toss in and go, a recipe that is perfect for a busy day. So I’ve decided to keep it at that.There are many uses for this pork, which are listed in the recipe. It is most definitely not limited to just tacos.

You can also add more sugar if you’d like, if you want a really sweet pork. This pork is quite possibly even better the second day around, I feel it gives it more time to absorb more flavor (it’s not often I say a certain food is better as a leftover =). 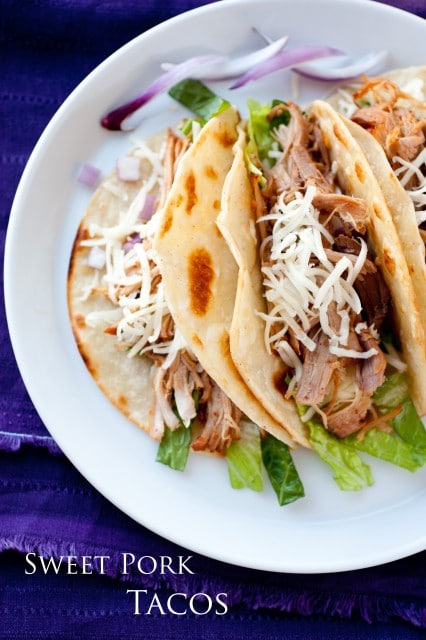 This is my second time making this recipe and I’d have to say it is very close to that of Cafe Rio (I brought some of theirs home to compare). It’s flavorful, unbelievably tender, with just the right amount of sweet, and again it’s incredibly versatile.

So, if you have some of this left over after your tacos from the first day then the next day around you could use it for enchiladas and so forth. Enjoy!

Note: these are my tacos without 85% of the toppings I add =). I had to leave them off so you could actually see the pork. For topping ideas I like to use: Romaine lettuce, Monterey Jack, Cheddar, or Cotija cheese, diced Roma tomatoes or pico de gallo, guacamole or diced avocados, sour cream, green or red onions, fresh salsa or cilantro lime ranch, hot sauce (Tapitio and tons of it), lime juice and cilantro.

Not all of those at one time but most. It just depends on what I have on hand but they are all great options. Also, I always serve them in fried corn tortilla shells or fresh flour tortillas.

This version is made in the slow cooker and it's perfect for adding to tacos, burritos, quesadillas and more! It's deliciously flavorful and super tender, just like Cafe Rio!
Servings: 8
Prep15 minutes
Cook8 hours
Ready in: 8 hours 15 minutes