S’mores Mousse is two decadent desserts in one! It’s layered with a crisp graham cracker base, a luscious easy to make chocolate mousse and it’s finished with a light as air marshmallow cream topping. A must try dessert! 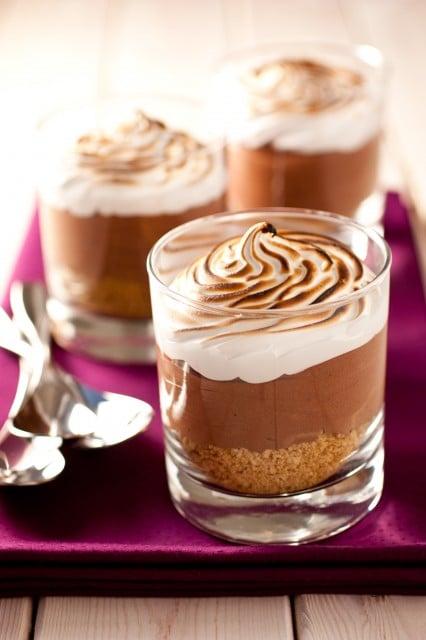 Smore’s. Beautiful, heavenly, roasty toasty, blissfully chocolaty, soft and perfectly melty marshmallow smore’s, how I miss you. I don’t care that it’s not summer yet, I just care that I can’t form a bon fire atop of the snow to roast a mallow to sandwich between two crisp grahams with a generous amount of melted chocolate. I don’t need the sunshine, I need a s’more =).

So this crazy, highly unusual thing happened at my house today. I opened my fridge to make sugar cookies and ahhhhh… I only had a half of  a stick of butter. I hoard butter because I bake so much and I couldn’t believe I was out.

It was because I had margarine sitting their (stupid margarine) and mistook if for butter so I didn’t buy any butter when I was at the store and I wasn’t about ready to turn right back around and head back to the grocery store.

I normally don’t even own margarine but I was working on a Paradise Bakery chocolate chip cookie copycat recipe (yes and their cookies are made with margarine). Anyway, none of that has anything to do with this recipe other than the fact that it left me with a lack of time to make a dessert before the daylight was completely faded to get a photo to share with you, and also the issue it left me with making a dessert that contained a very small amount of butter. 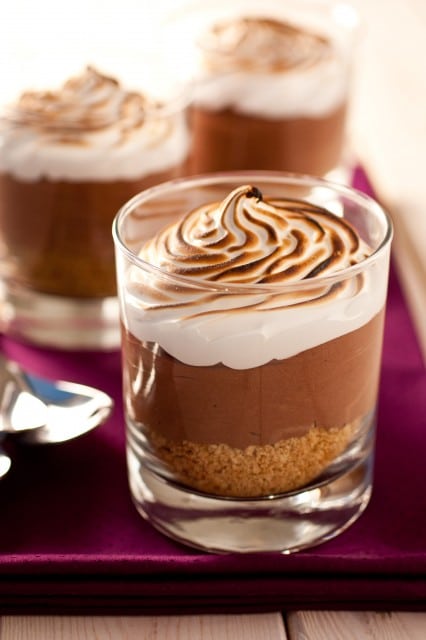 After a little searching through my cupboards and rummaging through ingredients I had on hand, I decided something along the lines of a S’more would be perfect.

Normally I’m all about made from scratch but due to the lack of time I needed a quick mousse that wouldn’t have to cook and chill for an hour or two. Every now and again I will get out some sort of boxed something when I’m in a hurry and just try to enhance it a bit.

I found this recipe for the mousse and decided it was perfect because, no I don’t like pudding made from the box, BUT if it has cream and sweetened condensed milk (two of my favorite ingredients) in it then it’s got to be good, right? I decided it wasn’t nearly chocolaty enough though so I added in some cocoa powder to easily solve that problem.

It is fluffy, creamy and of course, completely simple. It pairs perfectly with the light, melt in your mouth marshmallow creme and crisp graham cracker crust. This is s’more meets mousse, meets chocolate cream pie. Decadent divinity in a cup. Enjoy! 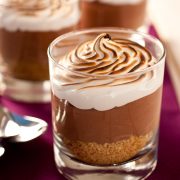 This is two decadent desserts in one! It's layered with a crisp graham cracker base, a luscious easy to make chocolate mousse and it's finished with a light as air marshmallow cream topping. A must try dessert!
Servings: 6
Prep25 minutes
Cook5 minutes
Ready in: 30 minutes