Banana Bread Pancakes with Cream Cheese Glaze – a breakfast favorite upgraded with the flavors of sweet bananas! Surely one of the most decadent, fluffy pancake recipes! 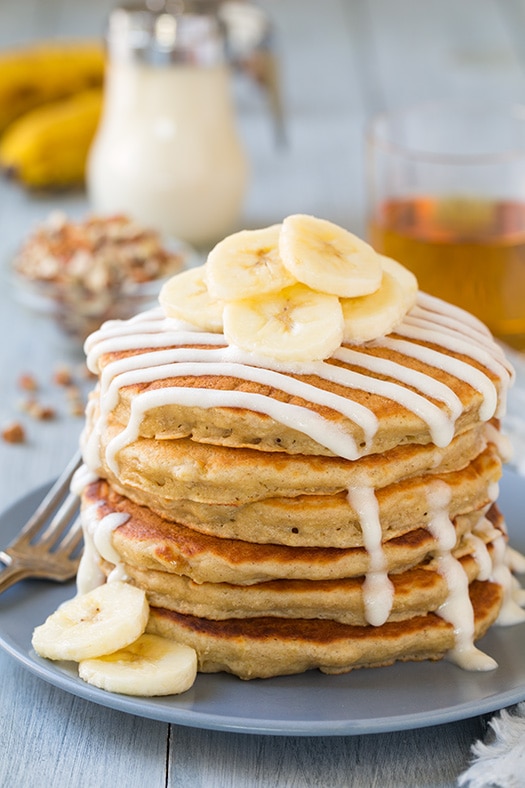 I am in love with these pancakes! They taste just like banana bread with the bonus of a decadent cream cheese glaze. Their texture is even much like banana bread. So I’m thinking when I get that craving for banana bread, at least half the time I’ll be making these instead because they are ready so much faster than a loaf of banana bread is.

Who could resist a breakfast like this? This would be something that’s perfect to serve to friends or your in-laws when they’re spending the weekend. They are thick and puffy and they have just the right amount of sweetness especially once finished off with that sweet and tangy cream cheese glaze. I made the glaze to be fairly runny because I don’t want to top my pancakes with a thick frosting-like glaze. If you’d prefer that, than just reduce the amount of milk accordingly, and if you want it even runnier just add a few more tablespoons milk. 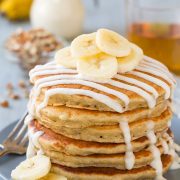 These soft and fluffy pancakes are the perfect weekend breakfast treat. They taste just like banana bread and it's a great way to use up overripe bananas. Yields about 9 pancakes.
Servings: 9
Prep20 minutes
Cook15 minutes
Ready in: 35 minutes