Merry Christmas everyone! I just want to say a quick thank you for making 2013 a great year for Cooking Classy! It wouldn’t be what it is without all of you reading and following along, pinning, and sharing with your friends, so thank you! :)

I truly hope you’ve thoroughly enjoyed the recipes! And hopefully we can make some delicious food together come 2014. 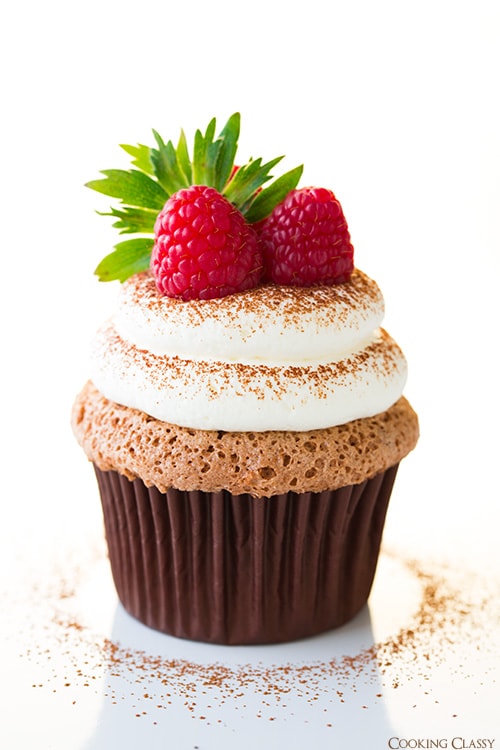 Seeing as it’s Christmas Eve, we better be having something fancy in order. For me elegant food often means some sort of decadent cupcake or chocolate (of course) so I’ve put the two together to make these irresistible Chocolate Angel Food Cupcakes with the most amazing Chocolate Cream Cheese Whipped Cream Frosting.

I could sit around and eat these things, all day, every day. I’d definitely label these as one of my new favorite cupcakes! They are so light and fluffy, yet so decadent, and simply deluxe.

These are far from those sponge-like, dry angel food cakes you get at the grocery store. Try these and you’ll probably never go back to those. B

esides, cupcakes are prettier than a slice of cake. Even if you’re not a cupcake or sweets lover (does that exist?), I have the feeling you’ll love these!

They’re aren’t overly sweet and they have the perfect balance of chocolate and tang (thanks to the cream cheese in the topping), along with a fresh, natural sweetness and zip from the berries.

If you want to go all out in chocolate, then dip the berries in chocolate before adding to the tops. I think I’ll have to do that next time. Nothing like chocolate indulgence. Enjoy! 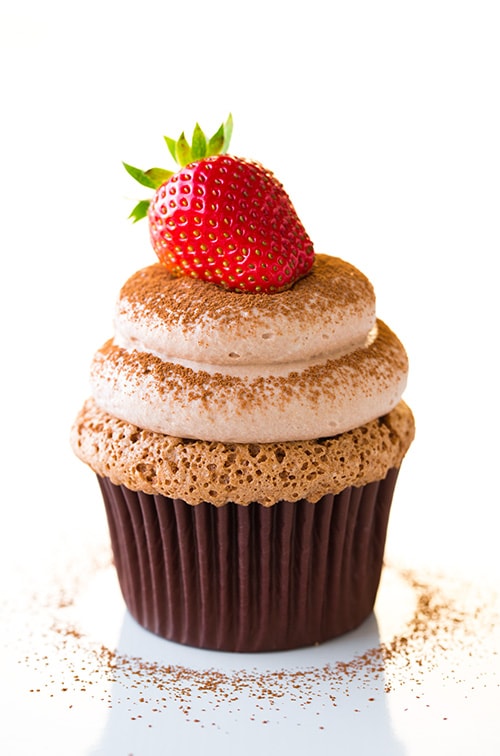 If you’d like, you can make the frosting into both flavors, the plain and chocolate (I think I might try doing a twist with both flavors on each cupcake next time).

I simply divided the mixture in half then folded the cocoa into one half and left the other half plain.

I prefer not to add vanilla to this topping because with a whipped cream I don’t like to mask that sweet cream flavor, but if you’d like you can always add in a 1/4 – 1/2 tsp.