Chicken Gyros with tangy Tzatziki sauce and soft, fluffy homemade Greek pita flatbreads. These gyros are insanely delicious and can be filled with your favorite veggies and salad. 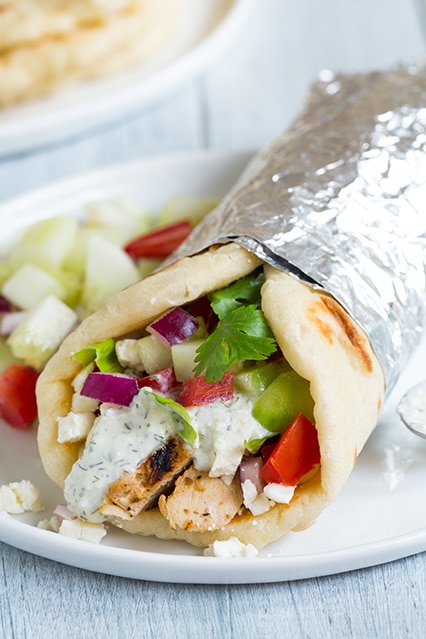 Isn’t Greek food amazing? I’ve never been a huge fan until this past year. I live in the Midwest and have temporarily moved to the East coast and there is SO much more Mediterranean food here than where I’m from.

We had some delicious gyros last week at a restaurant, so it inspired me to create some at home. Yes, these pita gyros have a lot of steps and they can seem to have a lengthy prep, but if you do it all from scratch you’ll be glad you did.

Although, if you are looking to make it a little bit healthier you could simply omit the pita altogether and just make it into a salad (which is what I did the second day). Another option would be to serve it over lemon mint rice instead of pita.

Don’t get me wrong, the homemade pita is delicious, especially right when it comes off the hot skillet, but let’s be honest — we don’t often have a lot of time to make the entire meal from scratch.

A non-negotiable part of this recipe is the homemade tzatziki sauce. I make my own tzatziki sauce with Greek yogurt, cucumber, garlic, parsley, and dill. It’s so easy and takes only 5 minutes to make!

These homemade gyros are loaded with fresh and exciting flavors. Bland doesn’t exist in this wrap, which is one of my favorite things about it. This Greek wrap has the works, and it will leave you craving them time and time again.

Want to see how easy this gyros recipe is? Watch the video!

For the Greek chicken itself, you’ll need:

For the homemade tzatziki, you’ll need:

And to assemble the chicken gyros, you’ll need: 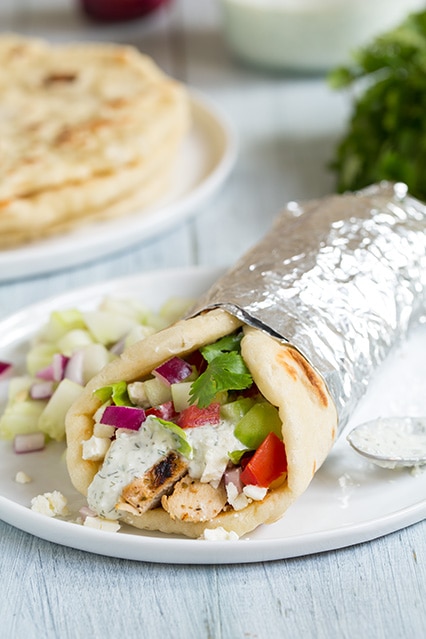 How to Make Gyros

Can I Let the Chicken Marinate Overnight?

No, if you leave the chicken in the marinade for too long the acids in the vinegar and lemon juice will start breaking down the chicken. You’ll be left with tough chicken after it’s been cooked.

Can I Make Chicken Gyros with Chicken Thighs?

Yes, you can make these Greek gyros with chicken thighs instead of breasts. Just keep in mind that you may have to adjust the grill time for the chicken.

Tips for the Best Gyros 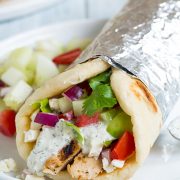 The ultimate chicken gryo recipe! These are packed with flavor and all made from scratch. Dinner doesn't get better than this!