Santa Hat Cheesecake Bites – made with chocolatey Oreo cookie crust, a decadent white chocolate cheesecake filling and finished with a fresh strawberry and sweetened whipped cream. Festive and so delicious! 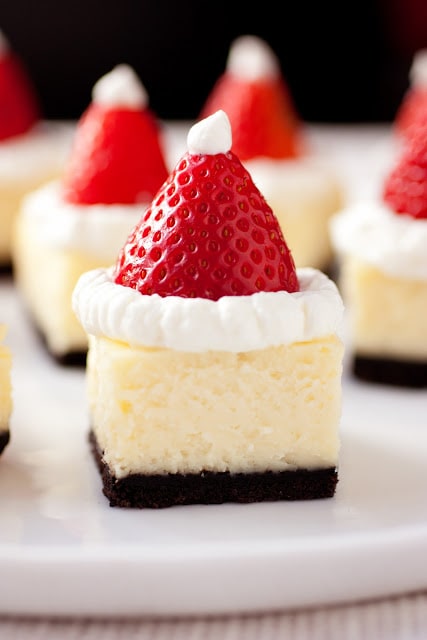 I adapted this recipe from my Heart Swirled White Chocolate Raspberry Cheesecake because it’s my favorite. I need to give my husband some credit in this post for pulling out some creative thinking.

So often I ask his opinion when I’m going to create something to post, for example which variation of food would taste better or look the prettiest. 99% of the time he responds with “I like them all.” To which I respond with, “well you have a million opinions about everything else so why not this?” Yeah it’s funny but this time he finally responded with some great feedback.

I explained I wanted to make these and asked if I should do a traditional graham cracker crust or an Oreo crust and he said “well the Oreo because it’s like a black Santa Belt.” Genius. I need his input more often =). No, I’m just glad he finally responded with an actual response this time around. 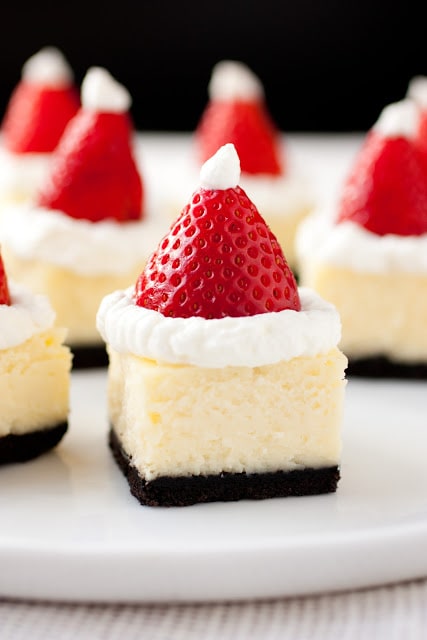 I also wanted to mention, if you really really don’t want to make a cheesecake from scratch (but you should because it so much better) you could by the frozen cheesecake bites from the store then simply top them with the strawberries and sweetened whipped cream. A definite short cut when you are in a pinch.

I hope you enjoy these divine little treats and remember to take a moment from all the hussle and bustle of the holidays…. to relax and enjoy the holidays….and eat cheesecake! I love fruit with cheesecake so this dessert was meant for me. Enjoy! 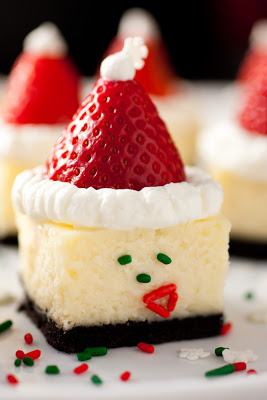 How could I resist adding some sprinkles?

Want to see how easy this cheesecake recipe is? Watch the video! 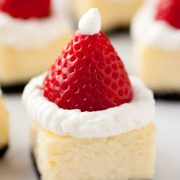 Made with chocolatey Oreo cookie crust, a decadent white chocolate cheesecake filling and finished with a fresh strawberry and sweetened whipped cream. Festive and so delicious!