Shrimp and Summer Veggie Foil Packs are so flavorful and so easy to make and they’re perfect for a weeknight dinner or your next summer cookout! They’re brimming with tender, juicy shrimp and vitamin packed veggies and it’s all deliciously seasoned.

The best part, is that everything is cooked together in individual foil packs so clean up couldn’t be easier!

This post is sponsored by Walmart however all thoughts and opinions are my own. 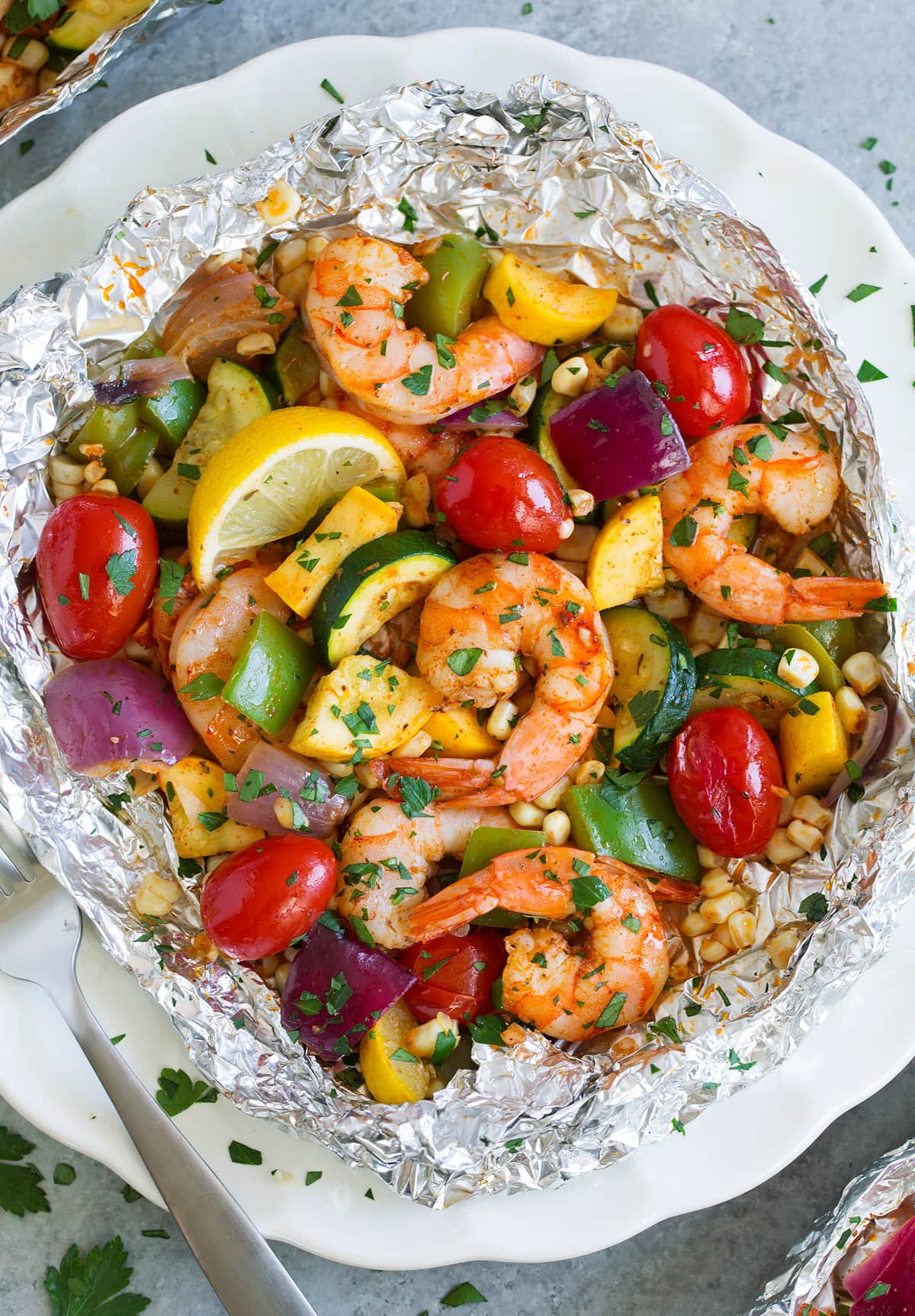 Every Summer I make shrimp foil packs of some sort. Two years ago it was Shrimp Boil Foil Packs. Then last year I made Garlic Lemon Butter Shrimp and Asparagus Foil Packs, and Cilantro Lime Shrimp and Cauliflower Rice Foil Packs. Now this year we are here loading all the veggies in with these Shrimp and Veggie Foil Packs!

Ingredients Needed for this Shrimp Recipe 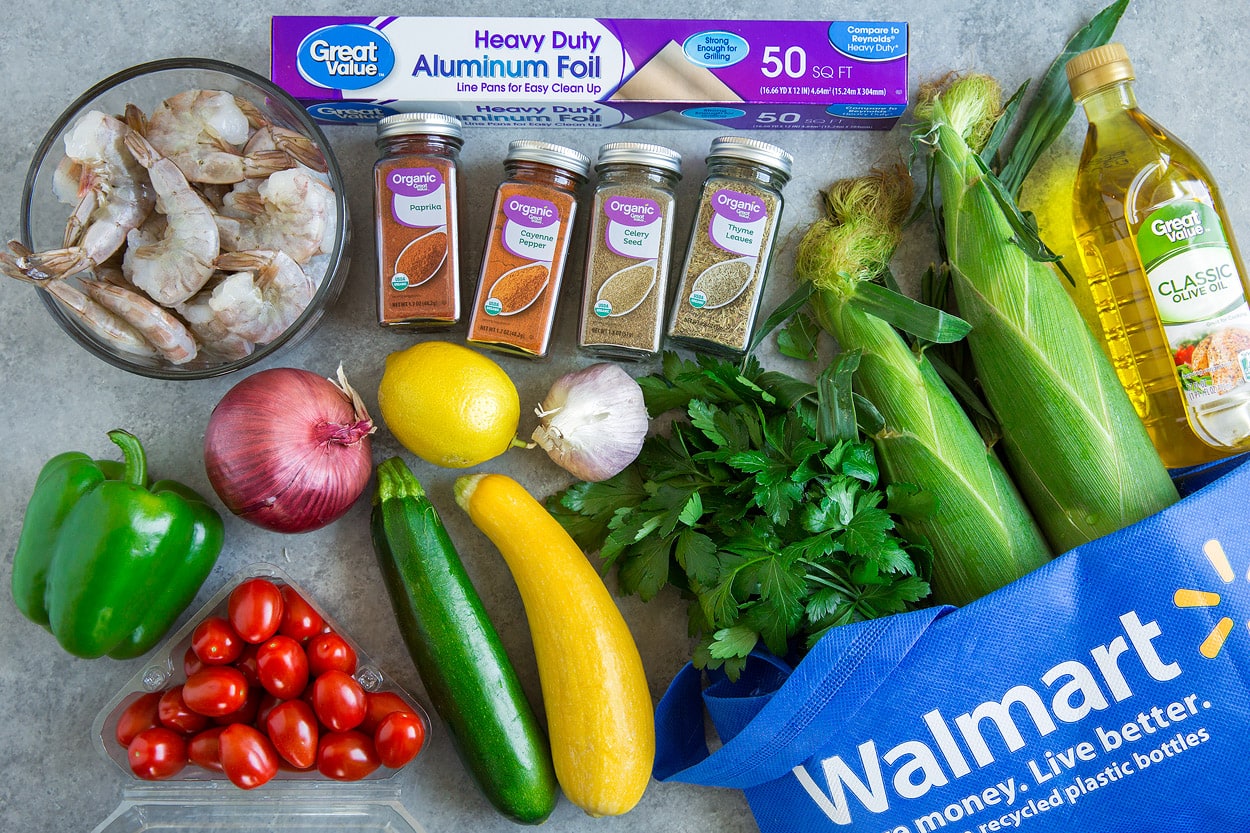 How to Make Shrimp and Veggie Foil Packs

You’ll start by preheating your grill over medium-high heat (it should come to about 425). Meanwhile cut 8 sheets of foil into pieces measuring 12 by 15-inches.

Then, you’ll cut up the veggies (keep tomatoes whole) and peel the shrimp.

Want to see how easy this shrimp foil pack recipe is? Watch the video! 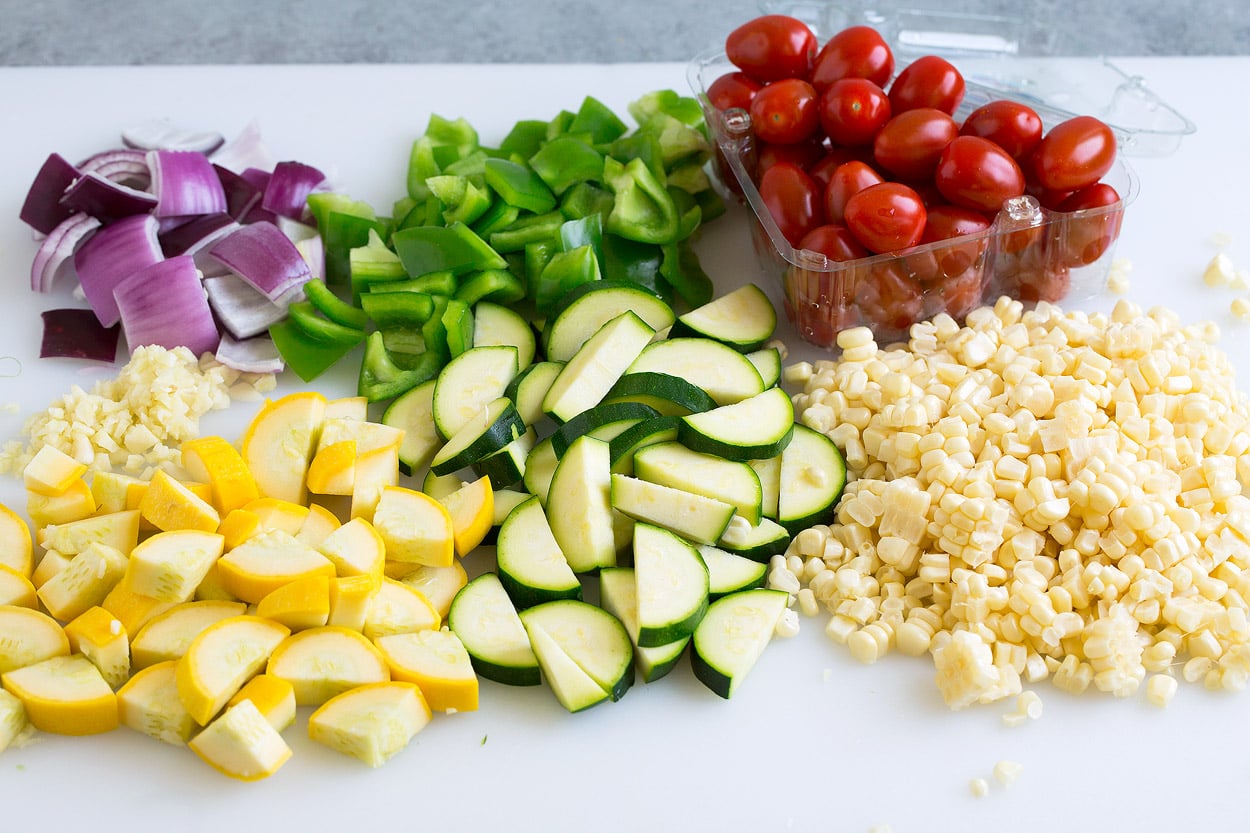 Add the shrimp and veggies to a large mixing bowl, then drizzle with olive oil. Next, sprinkle in garlic and spices (including salt and pepper). Then, toss everything together well. 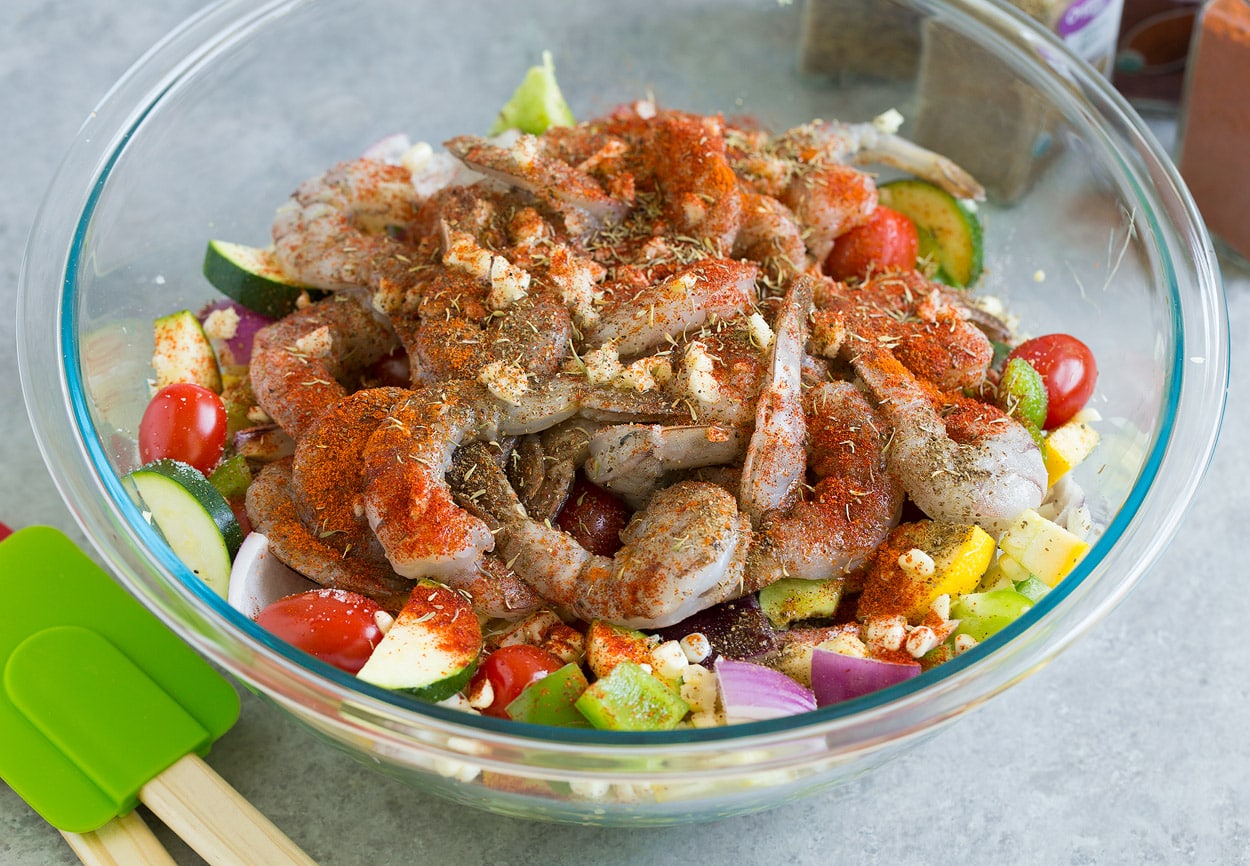 Divide mixture among double lined foil sheets (lay each sheet per packet in the opposite direction). I like to lay the mixture out in a rectangular shape. Then, wrap packets sealing edges well. 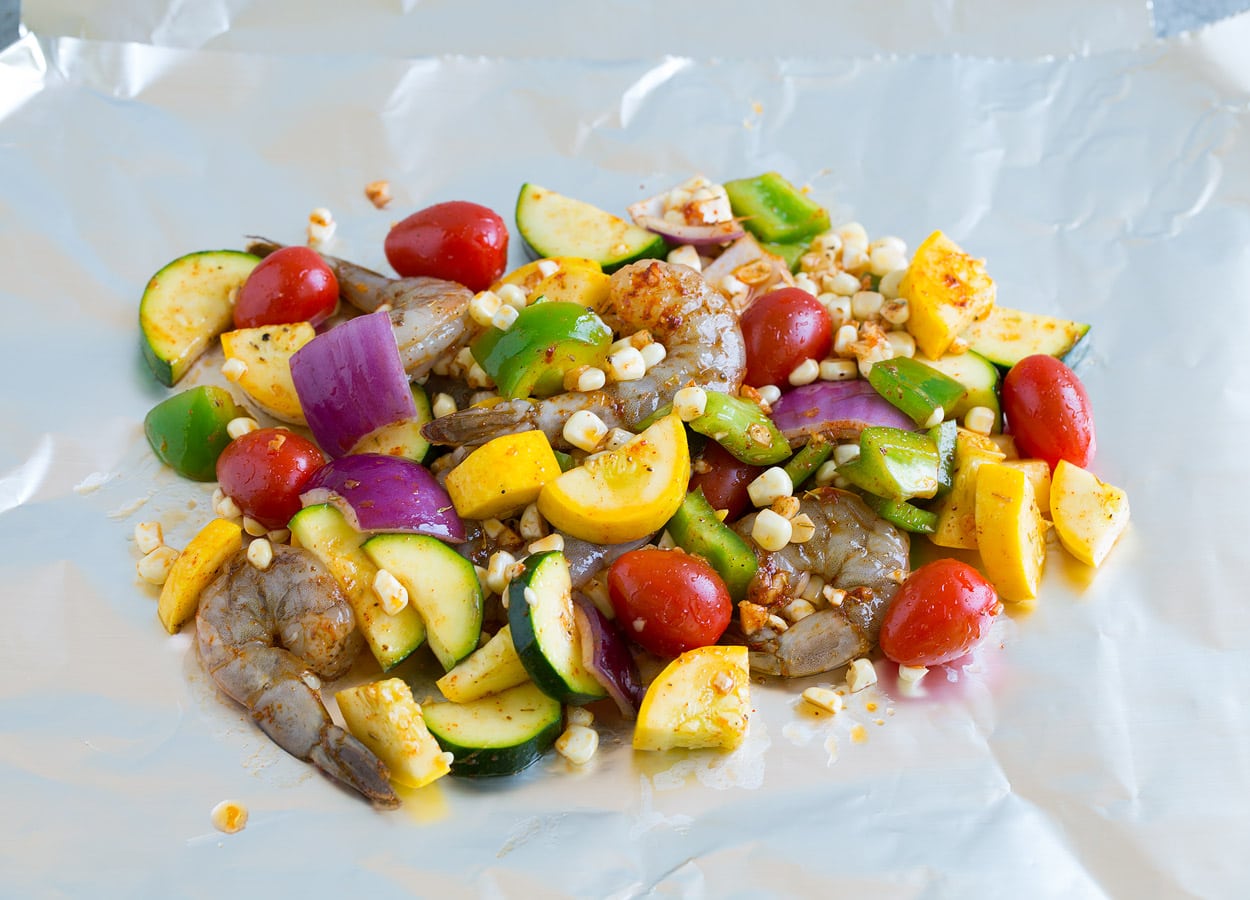 Place on preheated grill. Grill about 12 – 14 minutes, turning once halfway through grilling, until shrimp have cooked through. Open carefully and serve warm, garnished with parsley and lemon wedges for spritzing. 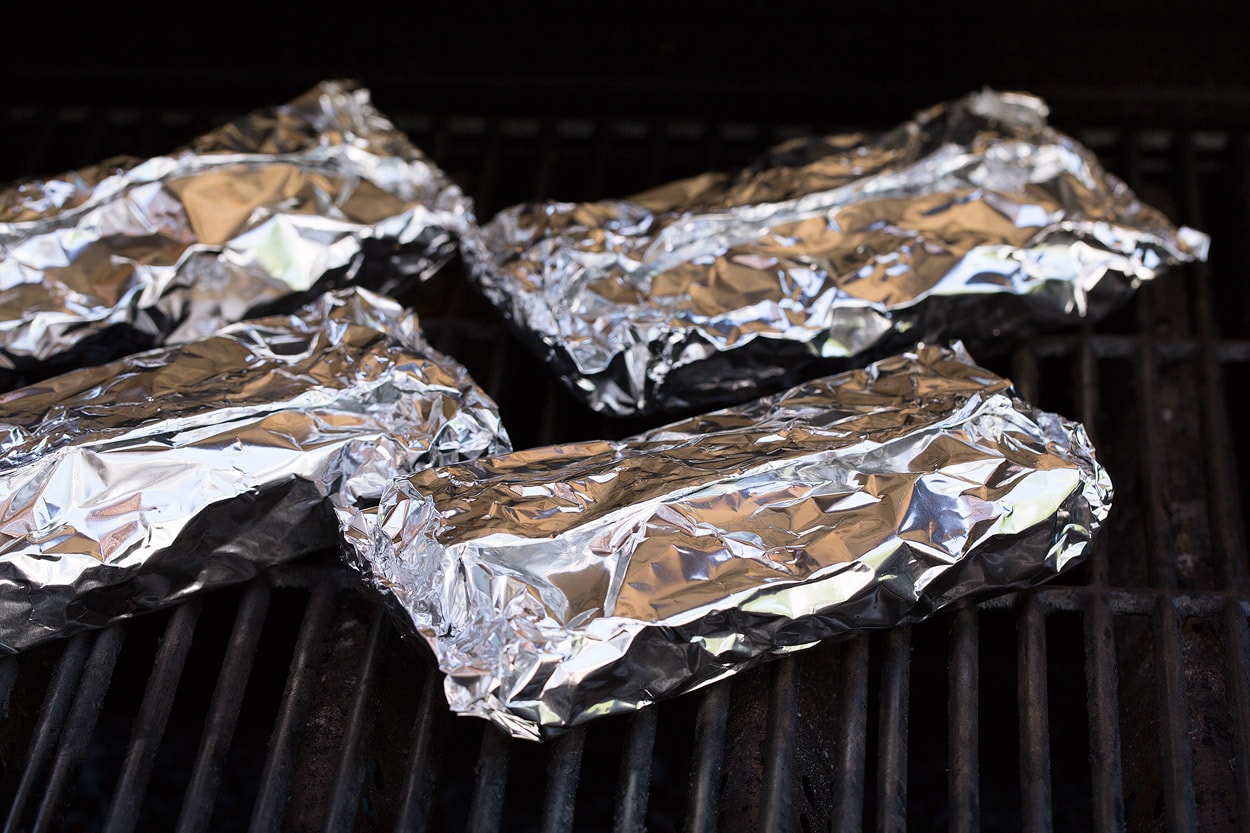 Quality Produce is a Must

Everything I used in these foil packs I bought at Walmart. They have great quality foods and fresh, locally-grown produce that I can count on. I’ve shopped Walmart for a long time because they consistently have deliciously fresh fruit and vegetables that I love to cook with.

Also, I’m always stocking up on lots of fresh fruits and veggies. They’re a go-to snack for me and my kids. I love to make “fruit plates” where I just add a rainbow of colorful fruits on a plate. My kids polish them off in no time!

I love that Walmart sells a variety of locally grown produce, and they re-stock their produce at a least once a day, so I know it’s very fresh. And did you know if you aren’t 100% satisfied with the produce you purchased from Walmart they’ll give you a full refund? Sounds like they’re pretty confident in the produce they’re offering. It really is delicious and it made these Shrimp Packs amazingly tasty and hearty! 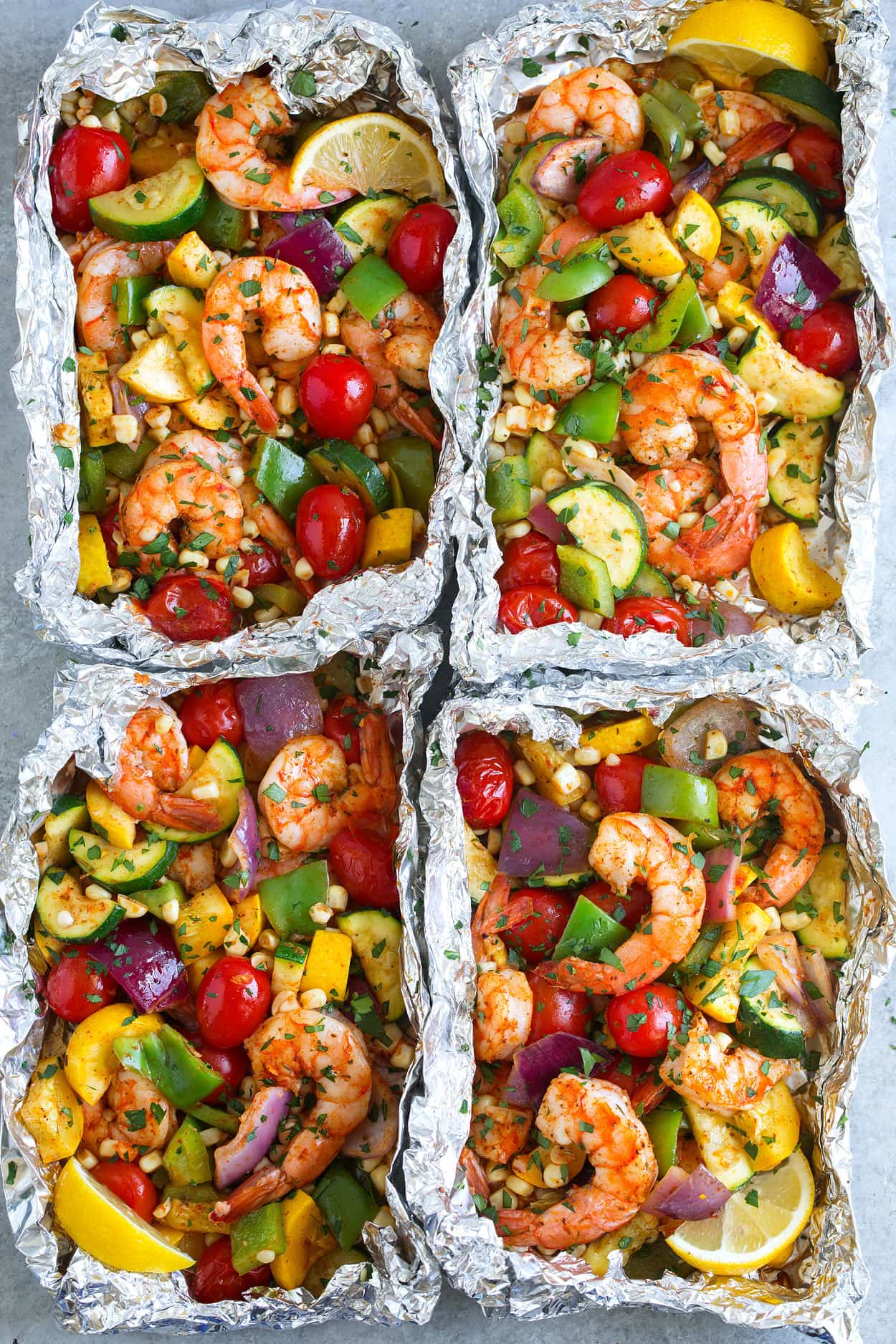 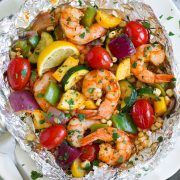 These are so easy to make and they're perfect for a weeknight dinner or your next summer cookout! They're brimming with tender, juicy shrimp and vitamin packed veggies and it's all deliciously seasoned. And the best part, it's all cooked together in individual foil packs so clean up couldn't be easier!