Streusel Pumpkin Pie – this crumb topped pie is one of the best you’ll ever taste!!

With that said don’t you think you better try it? It is what pumpkin pie dreams are made of. It’s perfectly pumpkin-y, it has just enough spice, and the well textured streusel just takes it way over the top. 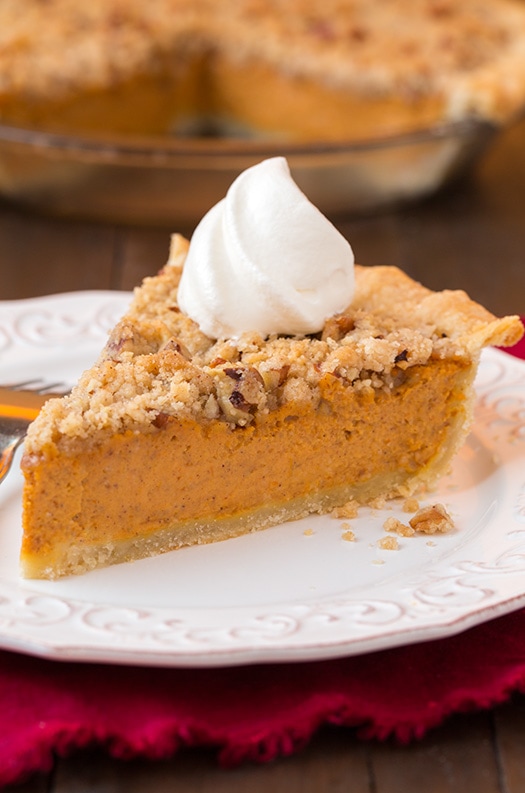 I’m all about a crumb topping on pie, it just adds so much more. You get more structure (I love the contrast next to the really creamy pumpkin filling), more flavor and more crunch (when it contains nuts like so). Pumpkin pie has always seemed a little boring to me but when you add the streusel and mix in a little cream cheese, it’s now complete.

For this pie I didn’t blind bake my crust, but if you’d like to feel free to do so. I’m torn with blind baking pie crust on a pie like this because I feel it cooks the edges too long and they become too dark and crisp (even when covered), but the bottom won’t have that delicious flake like the sides do if it’s not blind baked. So, do as you’d like there I can’t say there is one right or wrong way. It saves time not too though so that’s always a definite bonus. 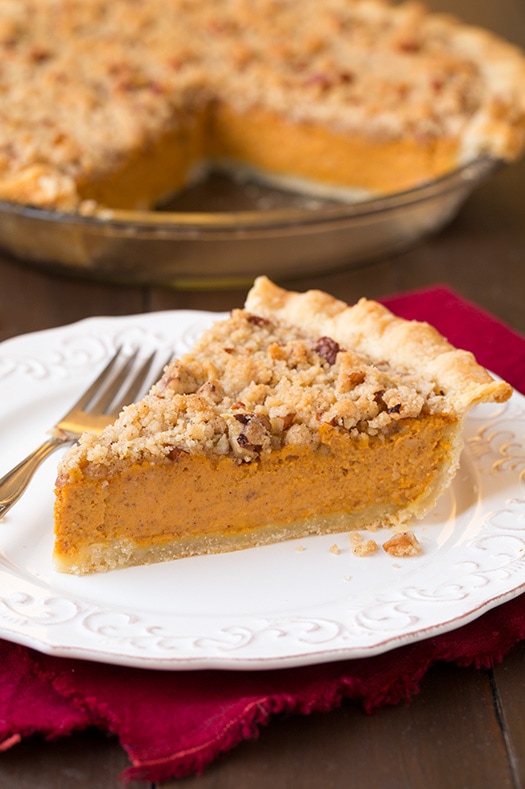 Be sure to allow plenty of cooling time for this pie, about 2 hours room temp and 2 hours refrigerator. Also for optimum results with the crumb topping serve within 24 hours of preparing (for a crisp streusel)

If you plan on making a pumpkin pie this holiday season I highly recommend trying this one out, you won’t regret it! 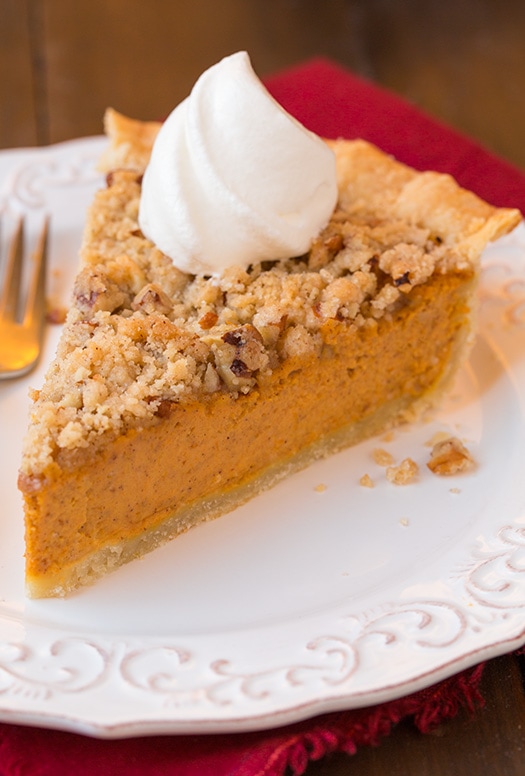 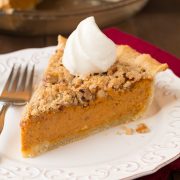 This is the tastiest pumpkin pie! You get a buttery flakey pie crust topped with a creamy perfectly spice pumpkin filling and it's topped with a tempting crisp crumble. Everyone will love it!
Servings: 8
Prep45 minutes
Cook1 hour
Chill30 minutes
Ready in: 2 hours 15 minutes

*I just used 1/4 cup + 2 Tbsp of each heavy cream and milk, since I already bought the heavy cream for the whipped cream topping. That way you don't have to buy both half and half and heavy cream if you already keep milk on hand.
**Update 12/26/15 - I made this pie again today for Thanksgiving and I decided to blind bake the crust first because I'm becoming so picky about pie crust. It was the best pie I've ever made and everyone was raving about it and how good the crust was! The crust was perfectly flakey and delicious. If you'd like to do so with this recipe then shape the pie crust in the pie pan and freeze 10 minutes then line with foil in center, fill with 2 lbs of dry beans and bake in a preheated 400 oven in center of oven about 10 - 13 minutes - also keep the crust edges tented with foil the entire time this pie bakes (including the blind baking). Then remove beans and bake about 5 - 10 minutes longer until it's starting to appear partially dry. Then let cool and proceed to fill and bake as directed, but again don't forget to tent the crust edges with foil the entire time and they should end up perfectly browned in the end.
Nutrition Facts
Streusel Pumpkin Pie
Amount Per Serving
Calories 510 Calories from Fat 270
% Daily Value*
Fat 30g46%
Saturated Fat 16g100%
Cholesterol 135mg45%
Sodium 265mg12%
Potassium 240mg7%
Carbohydrates 56g19%
Fiber 3g13%
Sugar 30g33%
Protein 5g10%
Vitamin A 9167IU183%
Vitamin C 2mg2%
Calcium 89mg9%
Iron 3mg17%
* Percent Daily Values are based on a 2000 calorie diet.
Nutrition values are estimates only. See full disclaimer here.
Course: Dessert
Cuisine: American
Keyword: Pumpkin Pie
Author: Jaclyn 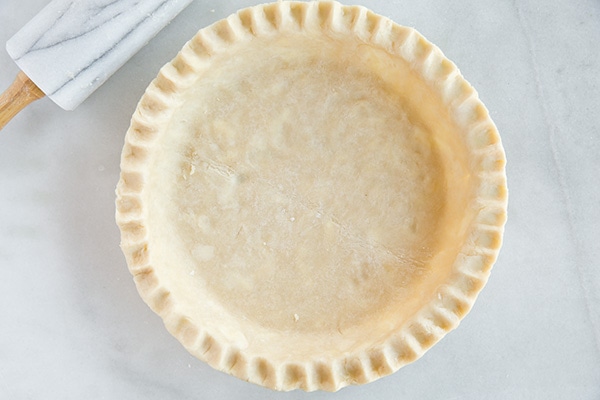 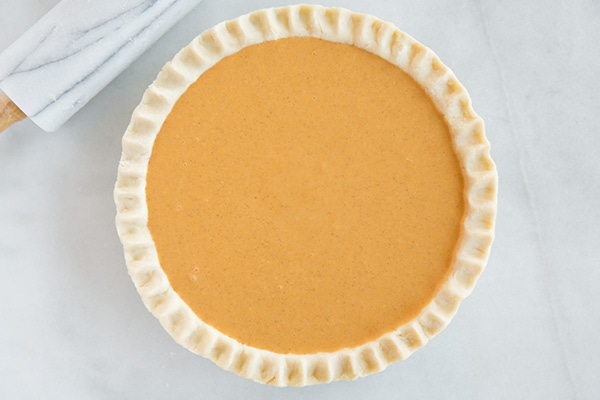 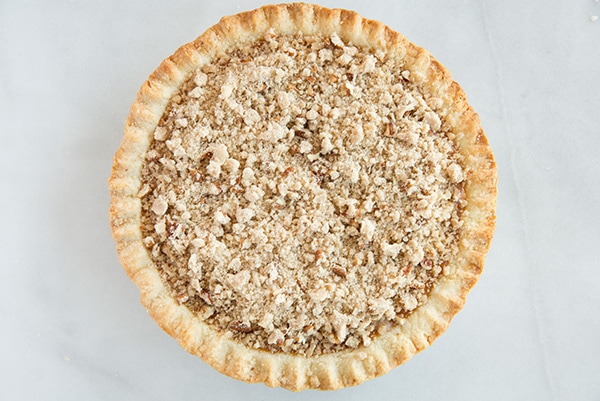 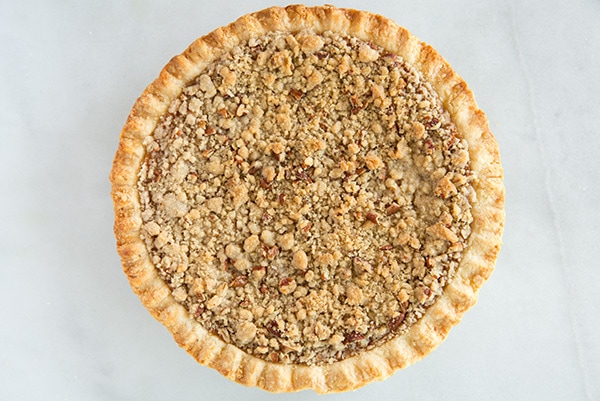