This summer Corn Chowder is creamy, comforting and full of flavor! Made with an abundance of fresh sweet corn, tender potatoes, flavorful hearty bacon, and finished with chives and cheese. Truly this soup is too hard to resist and can be enjoyed all summer long! 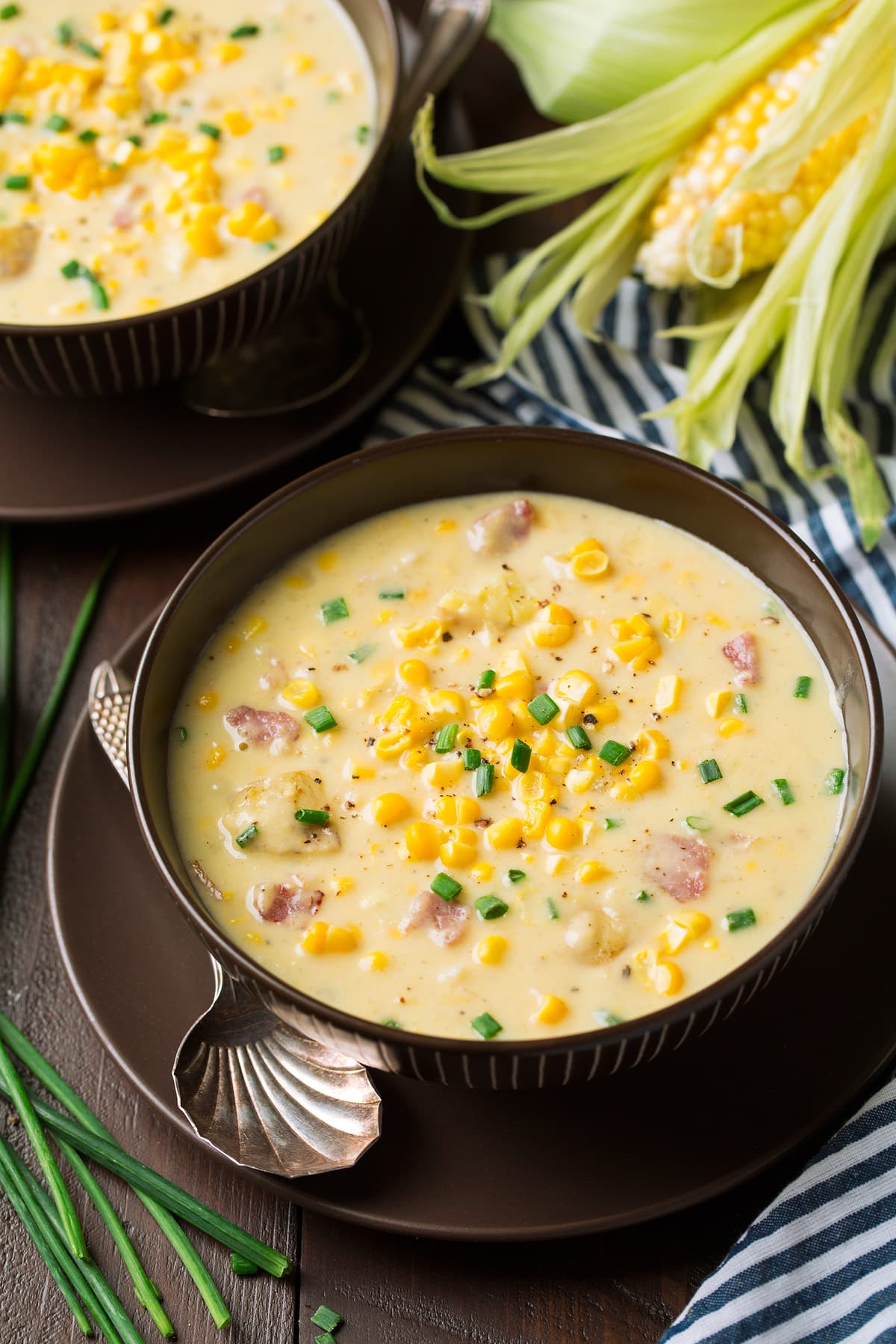 Don’t we all crave this time of year? Not only do we get those relaxing beach days, backyard cookouts, and weekend hikes to soak up that summer sun but it also means getting some of the best food of the year while all the fresh produce is in season.

It’s that time of year where you’ll find fresh corn on the cob galore, especially if you’re in the U.S. near the plethora of local growers. If you’re like us you’re likely eating it multiple times throughout the week and looking for more ways to use it and this corn chowder is one of the best ways to put it to good use!

It has everything you’d want in a corn chowder and then some. Nothing fancy, just tasty homestyle comfort food at its best!

You’ll love the rich and creamy texture paired with the tender crispness of corn in every bite. 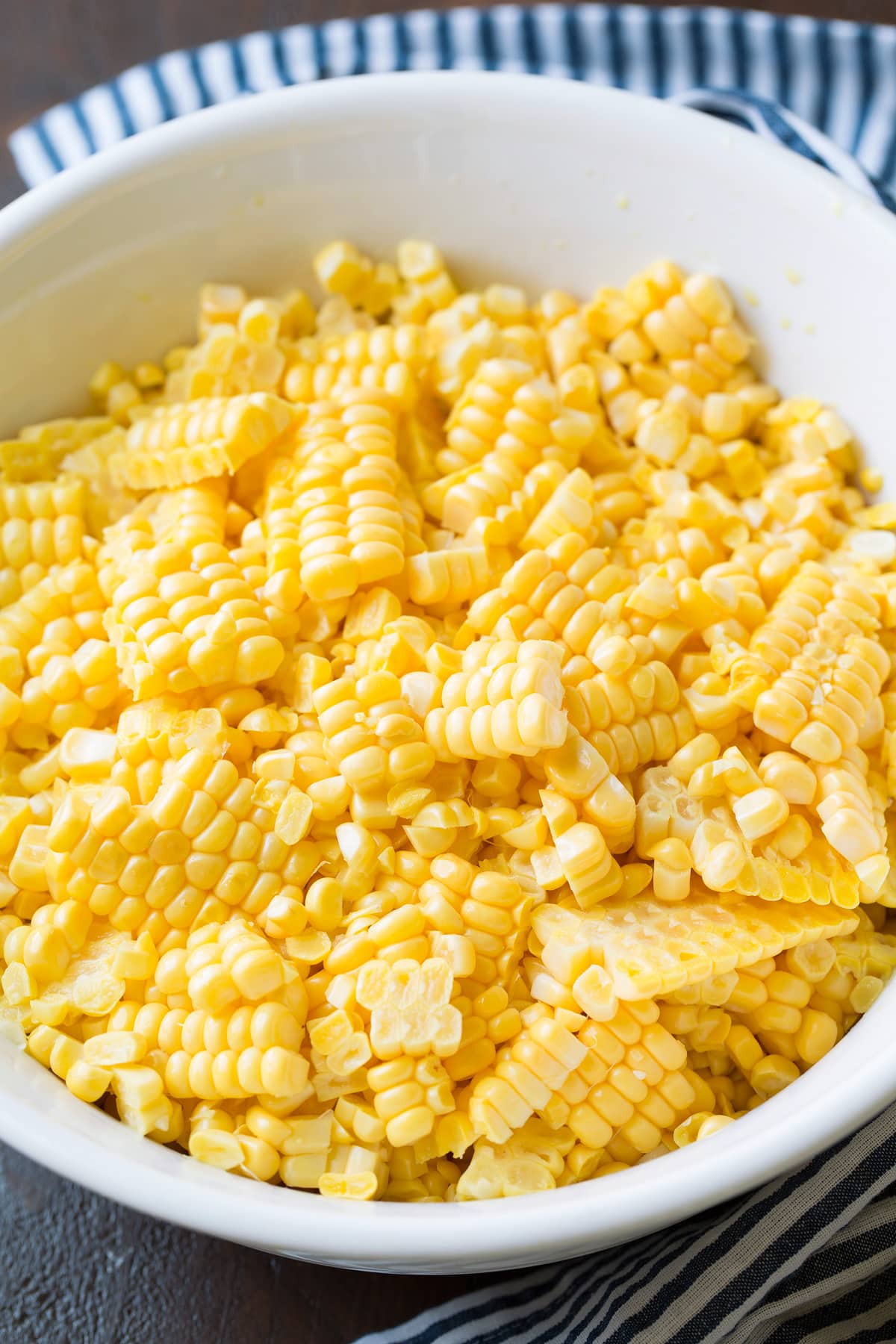 Can I Use Frozen Corn?

Key to the best corn chowder is to use the best corn on the cob you can find. It is the prominent flavor here after all and most important part of this soup. If your only option is frozen corn then yes it will work and it will make it easy, but when you have access to fresh corn use that for best results. 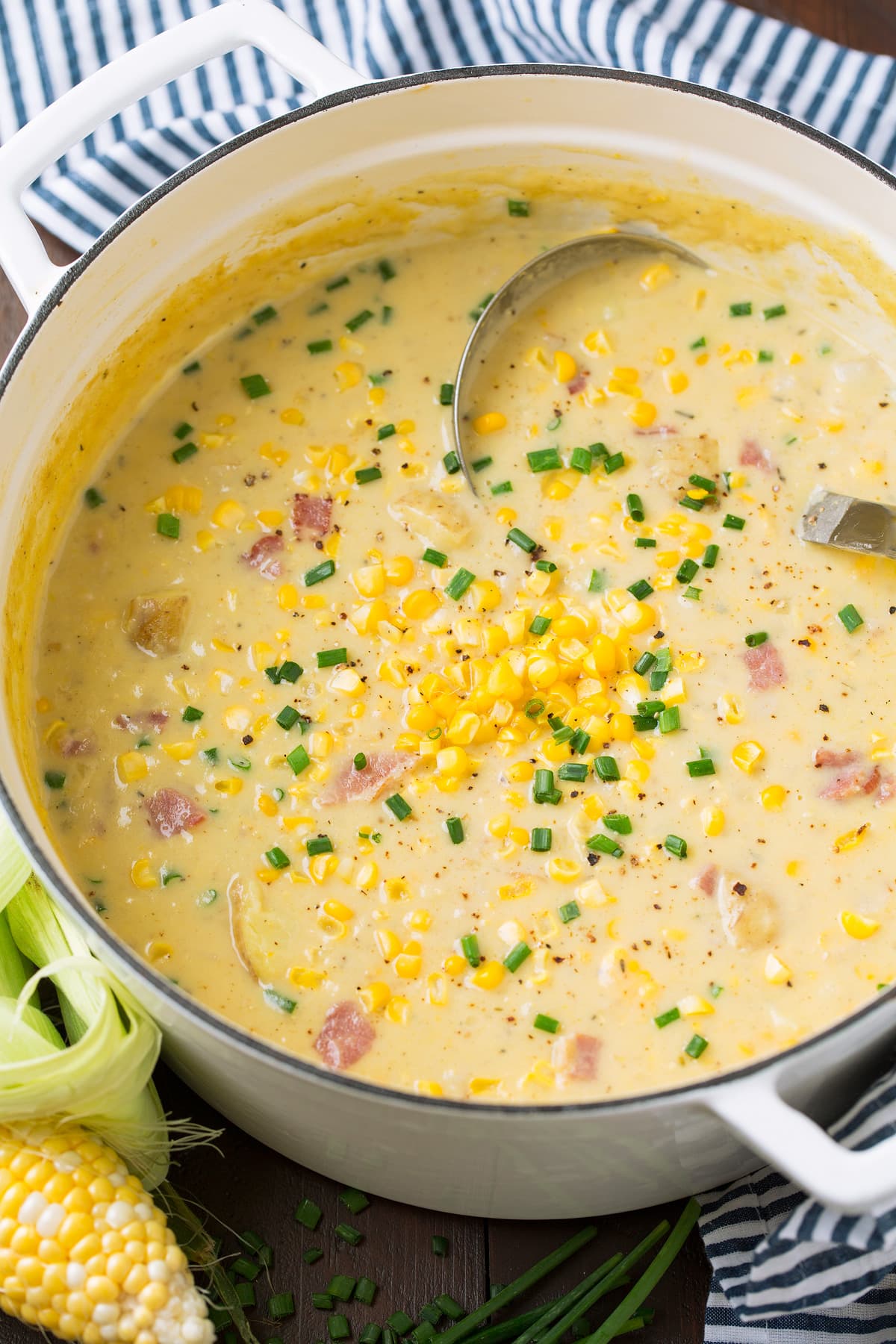 How to Make Corn Chowder 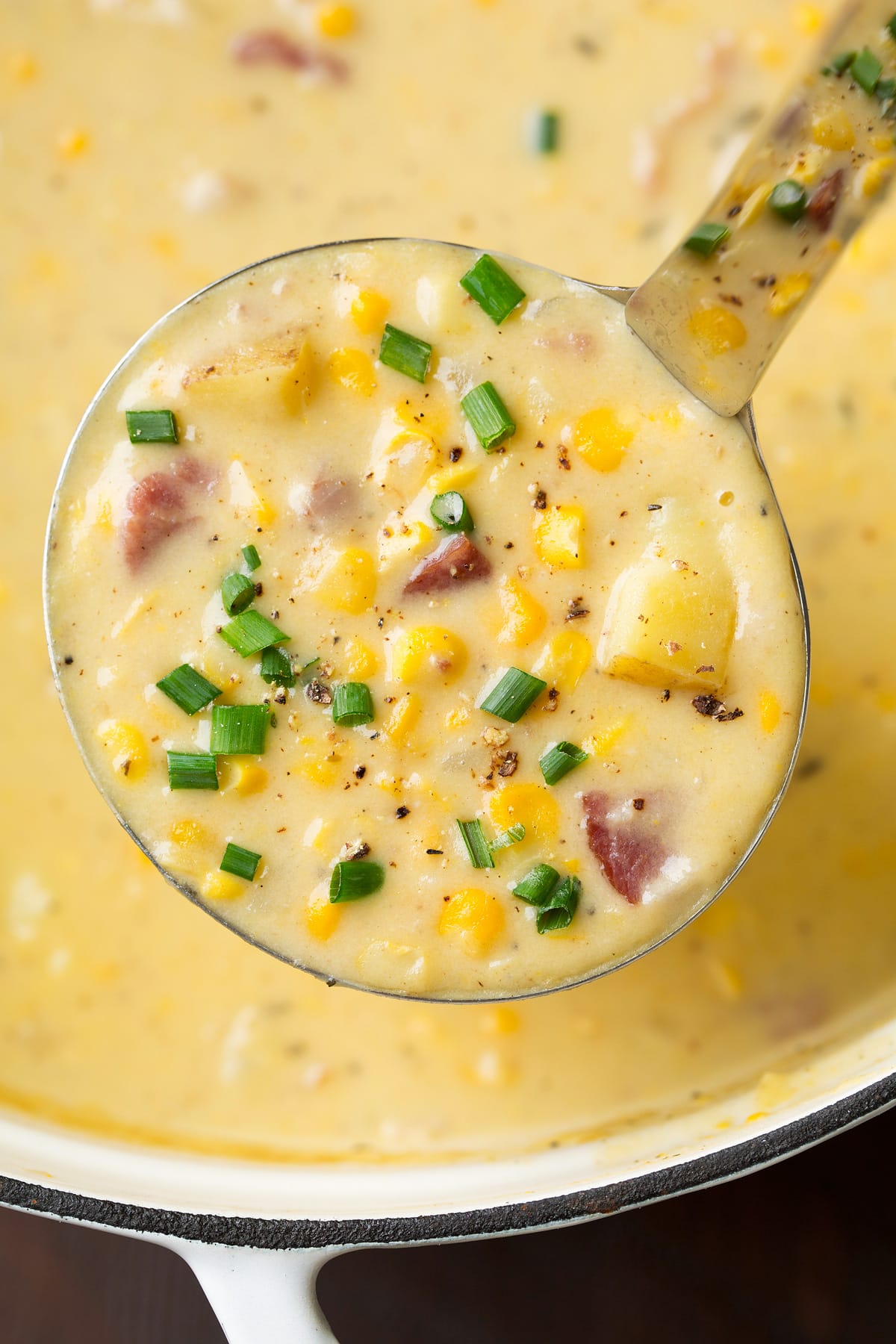 My Changes to the Original Recipe

I adapted this recipe with slight changes from Cook’s Illustrated. In their recipe they call for shaving off the remaining corn bits with a vegetable peeler after cutting the kernels from the cobs.

Then from there you have to wrap it in a cloth and squeeze out the juice.

First of all I found it a huge pain and a big mess and if I would have finished I wouldn’t have only ended up with half the amount of juice called for.

Secondly, I found an alternate method that was much easier, just cut the kernels from two extra cobs of corn, add to a food processor and pulse until pureed then force through a fine strainer and you should get about 1/2 cup juice.

But last of all, after finishing the soup I found it had plenty of corn flavor and everything seemed perfectly balanced so I didn’t even end up adding in that corn juice I’d extracted, so I figured it’s not worth the extra effort.

Who knows maybe that’s just personal opinion, but I thought the honey I added to the recipe (in place of the sugar they had listed) gave it the perfect touch of sweetness so the sweetness from the added juice wasn’t even needed.

I love how the bacon in this soup perfectly compliments the light natural sweetness of the corn, while the potatoes give it some body and extra creaminess. Then the final garnish of chives gives this soup the perfect little bite they need, so don’t omit them.

This is the perfect summer soup and once you try a bowlful you’ll want to head back for another serving and then you’ll want to continue to make it all summer long! 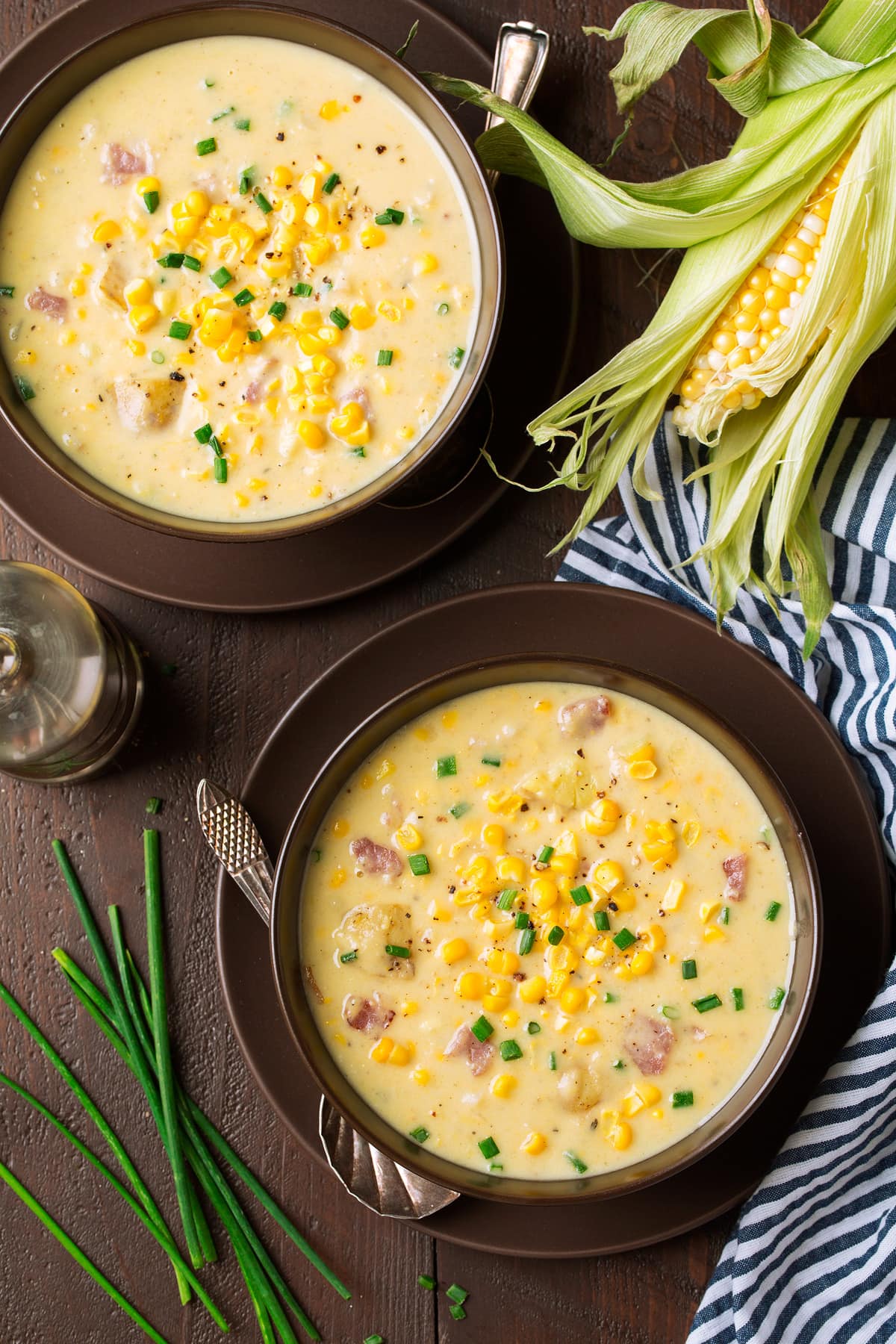 What to Serve with Corn Chowder?

Since this is a super hearty soup you don’t really need much with it. I like to serve with: 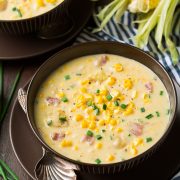 This Summer Corn Chowder is creamy, comforting and full of flavor. Made with bacon, garlic and cheese it's pretty hard to resist and can be enjoyed all summer long! Serve in big bowls with a side of crusty bread.
Servings: 6 servings
Prep15 minutes
Cook35 minutes
Ready in: 50 minutes